Dave Dombrowski out as Tigers GM 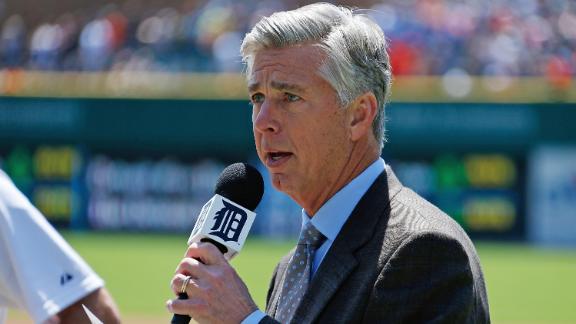 DETROIT -- The end of Dave Dombrowski's tenure in Detroit came suddenly and unexpectedly -- like so many of the moves he made to build the Tigers into an American League powerhouse.

Dombrowski is out after nearly 14 seasons as president and general manager of the Tigers. The Tigers, who have won the last four AL Central titles, announced the move Tuesday, catching people at Comerica Park and beyond by surprise. Dombrowski was fresh off making several big trades last week, and his exit set off rampant speculation about where he would work next.

Dombrowski was in the last season of his contract and overseeing a team stuck below .500, so there already was speculation about whether he would be back in 2016. But his abrupt exit -- accompanied by a somewhat cryptic explanation from the team -- was unusual.

He is being replaced by Al Avila, who has served as his top assistant since 2002. Avila's son, Alex, catches for the Tigers.

"I've decided to release Dave from his contract in order to afford him the time to pursue other career opportunities," owner Mike Ilitch said in a statement. "I feel this is the right time for the Tigers to move forward under new leadership."

About an hour after announcing Dombrowski's departure, the Tigers held a news conference at the ballpark, introducing Avila before Tuesday night's game against Kansas City. Ilitch wasn't at the news conference, and neither was Dombrowski. The Associated Press left a message with Dombrowski seeking comment.

"The only conversation I had with Dave was basically when he left," Avila said. "We said our goodbyes, and obviously, we're still great friends. I don't know how or why Mr. Ilitch made the decision. Really, that's a question more for him. That's something that I really had nothing to do with."

Avila said Ilitch hired him Saturday, a day after Dombrowski completed the last of his trade-deadline deals. Avila also said he has signed a new contract with the team that is "a number of years and long enough to give you time to continue to build on a winning tradition."

Tigers manager Brad Ausmus said he didn't know about the switch until Tuesday.

"I would like to thank Dave Dombrowski for his 14 years of service," Ilitch said in his statement. "Together we've enjoyed some success, but we're still in aggressive pursuit of our ultimate goal: to bring a World Series title to Detroit and Michigan."

Detroit has won four consecutive division titles, a streak that seems almost certain to end this year. The Tigers lost 5-1 on Tuesday to fall 12 1/2 games behind the first-place Royals.

Dombrowski's last major act at the helm in Detroit was to trade away some of the team's top players with an eye toward the future. David Price, Yoenis Cespedes and Joakim Soria all were dealt last week.

Dombrowski, 59, was the GM for the Montreal Expos and Marlins before moving to Detroit and is likely to draw interest from teams around the majors.

While the Boston Red Sox last weekend announced that Larry Lucchino is stepping down as CEO/president after his contract expires at the end of the year, a Red Sox source said Tuesday that they are not pursuing Dombrowski.

Dombrowski joined the Tigers as team president in November 2001, with Detroit coming off a 96-loss season. He became general manager the following April.

He presided over Detroit's AL-record 119 losses in 2003, but he eventually built one of the most star-studded rosters in baseball. The Tigers drafted Justin Verlander, traded for Miguel Cabrera and Max Scherzer, and signed several key free agents.

At times, Dombrowski's Tigers came seemingly out of nowhere to make big moves, such as signing Prince Fielder in 2012 and trading for Price at last year's deadline. Detroit won the AL pennant in 2006 and 2012 but is still without a World Series title since 1984.

"Obviously, it's tough. I've been with Dave since the beginning of my career," Verlander said. "He's done a fantastic job for this organization. I know him, and us that have been here since day one are disappointed that we weren't able to win a championship, but he definitely left a legacy with this organization."

Avila takes over a team with an uncertain future. Last week's trades helped Detroit add some much-needed young pitching to its system, but the Tigers still have long-term, expensive contracts owed to Verlander, Cabrera and designated hitter Victor Martinez.

Avila had worked with Dombrowski for more than 20 years.

"I think I'm uniquely qualified to take this job because of all the years I have spent with this organization," Avila said. "I know everyone here, and I've been involved with all of our decisions for a long time."

Avila assured fans that the Tigers aren't going to simply play out the string over the last two months.

"This does not mean we have given up on this season," Avila said. "We were sellers at the deadline, but we still have a good enough nucleus to win this season. The pedal is still to the metal."

The timing of the move puts Avila in the awkward position of taking over a roster that was just reshuffled by his predecessor, but he doesn't see it as a problem.

"Obviously, Dave was the general manager, so he made the final decision on all of those deals," he said. "But I had been the one that coordinated all of the information about the players involved in the moves, and I agreed with every one of them.

"When I agreed to take the job on Saturday, Mr. Ilitch assured me that he is still committed to building a team that can win championships," Avila said. "We're not going to be in cost-cutting mode. We will still have a payroll that will allow us to contend for the next several years."

Information from ESPNBoston.com's Gordon Edes and The Associated Press contributed to this report.

Dombrowski out in Detroit
The Baseball Tonight crew discusses how Dave Dombrowski was let go as president and general manager of the Tigers and whether Dombrowski could be a candidate to work with another team in the future.