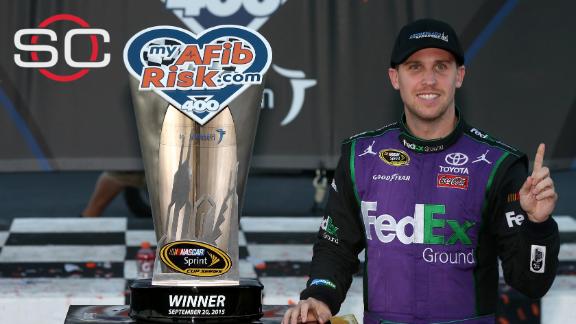 ESPN
JOLIET, Ill. -- Denny Hamlin vowed to make it to the championship round of NASCAR's playoffs, and nothing so far is getting in his way.

Not a torn ACL suffered playing basketball just days before the regular-season finale.

Not a horrible day of practice that resulted in an awful starting position for the opening round of the Chase for the Sprint Cup championship.

Not a spin Sunday two laps into the race that dropped him to last in the field at Chicagoland Speedway and one lap down from the leaders.

Hamlin stepped up and again showed his resilience by rallying for a surprise victory in the first race of the 10-race Chase. The win for Joe Gibbs Racing -- a heavy favorite to win the championship -- earned Hamlin an automatic berth into the second round of the playoffs.

It was a decidedly different mood for reigning champion Kevin Harvick, who vowed four days ago not to be intimidated by JGR's recent muscle and said "we're going to pound them into the ground" during the Chase.

Instead, contact with Jimmie Johnson on a restart caused a tire rub on Harvick's car. He thought the issue had fixed itself, but his left rear tire blew two laps later, and he was in the wall.

Harvick drove the car to the garage for repairs, and his anger toward Johnson was evident as he headed back on the track -- his finger pointed out his window at Johnson's crew -- 57 laps off the pace and second-to-last in the field.

Johnson went to Harvick's motorhome after the race to speak to Harvick, but Harvick walked out of the bus and shoved Johnson in the chest with a closed fist.

Harvick was separated from the six-time champion, and Johnson pointed at Harvick as he was restrained from getting at Johnson a second time. Harvick's wife, DeLana, exited a waiting car to walk over to the bickering drivers and Harvick eventually retreated to the back seat of the car as Johnson walked away.

A NASCAR spokesman confirmed to ESPN on Monday morning that no penalties are expected for Harvick's jab of Johnson.

Harvick is last in the 16-driver field, and four drivers will be cut from the Chase in two weeks. Asked what he needs to do to stay in contention, he was blunt: "We've just got to go win one of these next two races."

He felt that Johnson had no regard for his position on the racetrack during the restart when Harvick was third and Johnson was fourth.

"I just held my ground, and he just slammed into my door like I wasn't even there," Harvick said.

Johnson's version was that he got a push from behind from Joey Logano that sent him down to the apron. As he tried to get back on the track, he made contact with Harvick.

"I assumed he would try to find it as my fault. I just simply needed a lane to get back on the racetrack," Johnson said. "He was trying to pin me down and I've got to get back up or else there would be a hell of a mess in Turn 1."

Harvick crew chief Rodney Childers initially said on the team radio he felt Johnson deliberately hit Harvick. After the race, though, the disappointment seemed to be focused on the relationship Stewart-Haas Racing has with Hendrick Motorsports.

The two Chevrolet teams are pseudo-teammates, and Johnson and Harvick have a lengthy relationship dating to their early racing days in California.

"As much as we work together and share information, and I feel like we've helped them a lot this year trying to get their cars better, it's just disappointing," Childers said.

The trouble for Harvick was as surprising as the victory for Hamlin.

His rough day Friday in practice meant he had to start 29th in the race when qualifying was rained out. Hamlin said his toughest task was going to be showing patience in the early laps of the race as he tried to move a fast Toyota through traffic, but he spun trying to pick his way toward the front on the second lap.

Now last and a lap down, it seemed he had no shot at the win.

But his JGR team didn't panic, and crew chief Dave Rogers used a gutsy call not to pit during the final caution to give Hamlin a shot at the victory.

Hamlin slid to the bottom of the track to make it three-wide as he jumped from third to first on the restart with five laps remaining. Once past Jeff Gordon and Kurt Busch, he easily cruised to JGR's ninth win in the past 12 races.

Carl Edwards rallied from a speeding penalty to finish second and give JGR and Toyota a 1-2 finish.

Kurt Busch, who was headed for the win until the final caution was called with 10 laps remaining, was third and disappointed at the timing of the caution.

"It was the difference-maker today," Kurt Busch said. "My Chevy was fast, fast enough to win."

Ryan Newman, who used consistency to race his way into the championship round last year, was fourth and Kenseth was fifth to give JGR three drivers in the top five.

Johnson finished 11th and Gordon, second on the final restart, faded to 14th over the final five laps.

Headed into New Hampshire, the four drivers needing to make a big move off the elimination bubble are Jamie McMurray, Paul Menard, Clint Bowyer and Harvick.

Hamlin: 'It was a heck of a comeback for sure'
Denny Hamlin comments on his victory at Chicagoland in the first race of the Chase for the Sprint Cup.
Related topics:
sportsespnchase for the sprint cupkevin harvickdenny hamlinchicagolandjimmie johnsonsprint cupautoracing
Copyright © 2020 ESPN Internet Ventures. All rights reserved.
More Videos
From CNN Newsource affiliates
TOP STORIES
Man dies after Tesla crashes, bursts into flames in Pleasanton