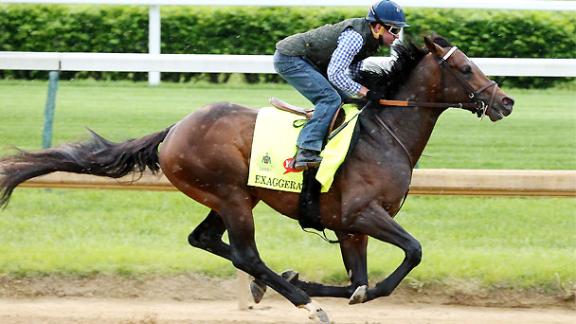 Exaggerator and Brody's Cause, the Blue Grass Stakes winner, worked at Churchill Downs, as did Dazzling Gem and Cherry Wine, both of whom currently have insufficient points to make the 20-horse Derby field.

Also working was Danzing Candy, the San Felipe Stakes winner, who is still in California.

Exaggerator, trained by Keith Desormeaux, had his brother, Kent Desormeaux, up for a five-furlong work that Daily Racing Form timed in 1:02.42. The work came as light rain began to fall. The rain became heavier once training was over.

Brody's Cause worked five furlongs in 1:00.49 under Tammy Fox, the life partner of trainer Dale Romans.

Romans also worked Cherry Wine, who is 25th on the points list. He went five furlongs in 1:00.91.

Those three all worked after the midmorning renovation break. Earlier, shortly after the track opened for training at 5:45 a.m., Dazzling Gem -- 24th on the points list -- went five furlongs in 1:00.64 for trainer Brad Cox.

He and Trojan Nation, the Wood Memorial runner-up trained by Paddy Gallagher, are scheduled to fly to Kentucky from California on Monday.

Nyquist, the current Derby favorite, was scheduled to arrive at Churchill Downs on Saturday afternoon following a van ride from Keeneland, where he had his final Derby work on Friday for trainer Doug O'Neill.

Creator and Gun Runner are scheduled to have their final Derby works on Monday for trainer Steve Asmussen. Mor Spirit, trained Bob Baffert, is scheduled to work Monday or Tuesday.