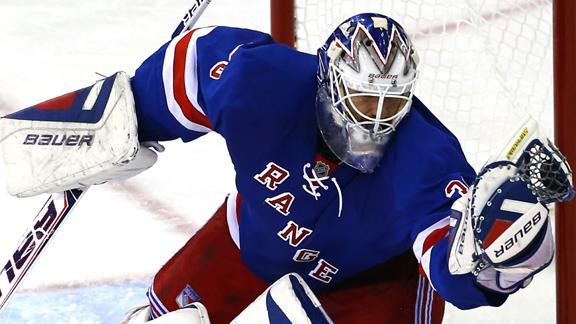 MONTREAL -- The New York Rangers, just one win from advancing to the Stanley Cup finals, may receive an extra boost from the return of forward Derek Stepan for Game 5 against the Canadiens on Tuesday night.

Stepan, who suffered a broken jaw in Game 3, participated in the morning skate at Bell Centre on Tuesday, wearing a full facial protector just four days after undergoing surgery to repair the fracture.

"The only way he's going to play is if he gets full medical clearance," Vigneault said in his pregame briefing with the media. "That's not up to him."

Vigneault said nutrition was a concern for Stepan because he has been limited to a soft-food diet.

Stepan, who was not available to the media after Tuesday's skate, took line rushes between Chris Kreider and Rick Nash, his regular linemates.

If the Rangers get him back in the lineup Tuesday night, it would be a huge lift for a team looking to close out the Eastern Conference finals and play for the Cup for the first time since winning it in the 1993-94 season. The Blueshirts took a 3-1 series lead after Sunday's 3-2 overtime win and are 12-1 when leading a series 3-1.

Stepan has three goals and 11 points in 17 games in the playoffs.