Dez Bryant likely to be franchised 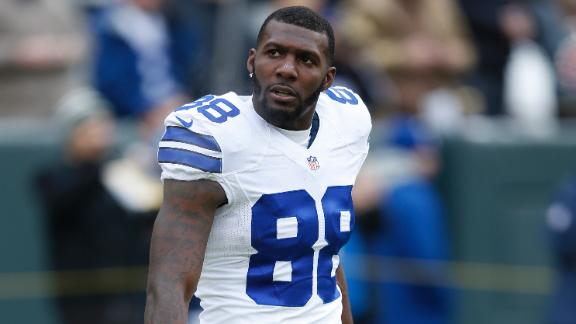 INDIANAPOLIS -- Dallas Cowboys executive vice president Stephen Jones said the club is leaning toward using the franchise tag on wide receiver Dez Bryant but is not in a hurry to do so.

The window to use the tag opened Monday, and the team must decide by March 2.

"Right now we're probably leaning that way," Jones said of using the tag on Bryant, who is an unrestricted free agent. "But that doesn't mean it won't change."

Because the NFL has not set the 2015 salary cap, the Cowboys do not know how much the tag will be or how much room they will have to spend. In all likelihood, the tag will be somewhere around $13 million for wide receivers.

"We'll probably wait 'til the midnight hour to make that decision," Jones said in a break between competition committee meetings at the NFL scouting combine.

Jones said the Cowboys have set up talks during the week with the agents for a number of their free agents-to-be, but nothing concrete has been set up with Kim Miale of Roc Nation and Tom Condon of CAA, who represent Bryant.

Bryant changed agents in the middle of last season. Jones said the Cowboys had "extensive" talks with Bryant's former agent, Eugene Parker, but would not say they were ever close to an agreement on a multiyear contract. Jones said the team has had a "visit or two" with Condon, "but I wouldn't say it was anything that [was] very detailed."

During the season, Bryant said he would be "highly disappointed" if the Cowboys used the franchise tag on him.

Jones said the team is not worried about Bryant's reaction if it designates him as its franchise player.

"I think Dez will be a pro and he'll play," Jones said.

On Tuesday, Bryant responded to a fan on Twitter and implied he is uncertain whether the Cowboys are as dedicated to him as he is to the team.

"Well, he's not feeling the right vibes then," Jones said in reaction to Bryant's tweet. "We feel strongly about him. We worked hard to do a long-term deal with him, and we'll continue to work hard at it. If we don't get one, then [the franchise tag] just shows him how much we care about him [that] we don't want to expose him."

The Cowboys last used the tag on defensive end/outside linebacker Anthony Spencer in 2013. It was the second straight year the Cowboys tagged Spencer, and he made $19.4 million over the two years.

"Those things cut both ways," Jones said earlier in the day. "The franchise tags pay the guys a lot of money. That's why I don't think you see many of them sitting out because it's hard to pass up guaranteed money, the type of money that these guys get when they sign their franchise tag. Of course, the second they sign it, it's guaranteed, so it's not terrible for these guys to play under the franchise."

If the Cowboys tag Bryant, they would have until July 15 to sign him to a long-term deal. If an agreement is not reached, he would have to play the season on the tag.