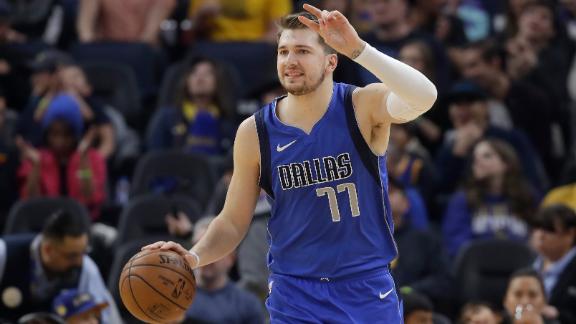 ESPN
SAN FRANCISCO -- Luka Doncic notched his ninth triple-double of the season and didn't even play the fourth quarter.

Doncic had 31 points, 15 assists and 12 rebounds in just 30 minutes, and the Dallas Mavericks routed the Golden State Warriors 141-121 on Saturday night.

"I didn't expect they were going to trap me in the half court," Doncic said. "If they trap me, they have to play four-on-three basketball, which is easy. It's not just one player on the court -- we have five -- and if they trap me, I'm glad. We're going to hit those open shots. That's easy basketball for us."

Tim Hardaway Jr. scored 25 points, Kristaps Porzingis had 18 and Seth Curry added 17 off the bench for the Mavericks, who snapped the Warriors' four-game winning streak.

D'Angelo Russell had 30 points and eight 3-pointers in the first half but injured his neck after falling and colliding with Dwight Powell during the third quarter.

"Thank God it wasn't anything too serious," Russell said. "Just a little shoulder contusion. The contact kind of knocked the wind out of me, but I'm good now."

Russell returned for the start of the fourth but the Warriors were down by 19 at that point. He finished with 35 points and six assists.

"I want to talk about Russell," Mavericks coach Rick Carlisle said, "because I have never seen a guy score 12 points in two minutes to start the game. Right off the bat, he was on pace for 288 points. The shots he was throwing in were amazing. We kept trying to figure out ways to take him out of rhythm. In the first half, it was virtually impossible. Second half, we got a little more traction."

The Mavericks pulled away when Russell was out, outscoring the Warriors 45-24 in the third quarter. Hardaway made a deep 3 with 6:55 left in the third to give the Mavericks an eight-point lead that would only grow as the game went on.

Draymond Green had 10 points and eight assists for Golden State, but he and the Warriors struggled to defend the Mavericks. Dallas shot 52.2% from the floor and made a franchise-record 24 3s.

"I wish we could have made more stops defensively," Green said, "but they're a good offensive team. I think in the third quarter we kind of ran out of gas."

Mavericks: Dallas made 10 3s in the first quarter. . Doncic played his second game in a row since he sat out four consecutive games with a right ankle sprain. "A recovery day and a half is helpful," Carlisle said. "He has done well through the rehab, and he's doing even a little bit better now."

Warriors: Golden State tied a franchise record with nine 3s in the first quarter. . Eric Paschall (bruised hip) and Omari Spellman (illness) both missed a second consecutive game. . The Warriors recalled Alen Smailagic from Santa Cruz of the G League. He had five points, five rebounds and three fouls in 20 minutes against the Mavericks.

Marquese Chriss shoved Doncic during the third quarter and Doncic fell backward into the first row of fans. Doncic jumped right to his feet and charged at Chriss until the referees separated them. "I got pushed," Doncic said. "I'm not going to just back up. But things happen in basketball like that. You have to move on."

The referees charged Chriss with a technical foul. "It got to be a snippy game," Carlisle said. "We're a young team trying to do exceptional things. We needed an experience like this tonight."

Mavericks: Take a 60-minute flight south to Los Angeles to play the second half of a back-to-back against the Lakers on Sunday. Dallas beat the Lakers by four points in November and ended Los Angeles' 10-game winning streak.

Warriors: Travel to San Antonio to play the Spurs on Tuesday. San Antonio beat the Warriors by 17 points earlier this season.