Fisher: Melo could decide to sit 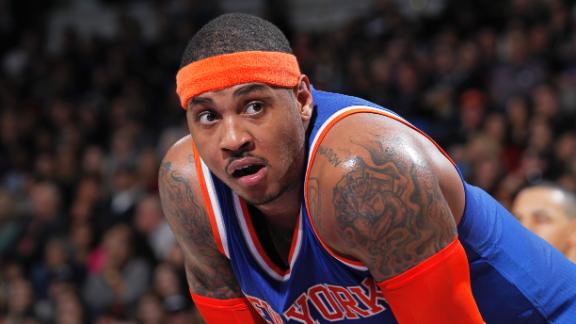 NEW YORK -- With the Knicks in the midst of a throwaway season, coach Derek Fisher has acknowledged the possibility that Carmelo Anthony might eventually sit out the remainder of the campaign due to a knee injury.

Anthony has been playing with soreness in his left knee since the second game of the season.

"From the conversations I've been a part of, I think everybody is smart enough to realize, calendar wise, timing wise, that there may come a point that that's the decision that needs to be made," Fisher said Friday. "But [we realize] that we can't force Carmelo to that point just yet."

Anthony sat out Friday night's 97-81 loss to the Detroit Pistons due to the knee soreness. He has missed three games due to the injury.

Fisher reiterated Friday that any decision to shut down Anthony for the season would be made with input from both Anthony and the Knicks organization.

"We can't unilaterally just say, 'Hey, you know, you can't play for the rest of the season because of A, B and C,'" Fisher said. "I think our medical staff, our training staff, continue to have conversations with him about where he is. He's conversing with us about how he's feeling, what the symptoms are. And so as each day kind of unfolds, decisions are being made. It's not something that we're just kind of stepping back and saying, 'Carmelo, you kind of tell us when you don't feel like playing anymore.'"

Anthony, in the first year of a five-year, $124 million contract, said he plans to play as long as the condition of his knee allows.

"It's tough. Some days you're able to do some things; some days you're not," Anthony said after the Knicks' loss to the Los Angeles Clippers on Wednesday. "Some days it's tough to even run around and cut and jump. And then other days I come in and I don't really feel it."

Anthony has said that having surgery is a "last resort" and that he's hoping to avoid anything of that nature until after the season.

Andrea Bargnani left the game after two minutes due to right calf soreness. Bargnani missed the first 33 games of the season due to a hamstring injury and a calf strain.

Could Melo Sit The Rest Of The Season?
ESPNNewYork.com's Ian Begley discusses Derek Fisher's comments on potentially having Carmelo Anthony sit out the rest of the season due to a knee injury.