Garza to Samardzija: Not your fault 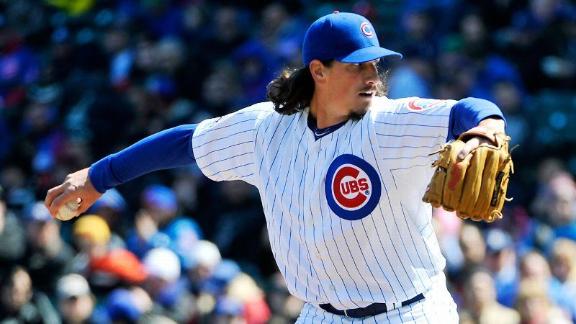 Matt Garza had some friendly advice for Jeff Samardzija, saying his former teammate needs to "pitch your way out of there" if he doesn't want to stay with the Chicago Cubs.

Garza spent parts of three seasons with the Cubs before being traded to the Texas Rangers last season. The right-hander was asked Saturday about Samardzija, who is set to become a free agent after the 2015 season and has been mentioned in multiple trade rumors. Garza was seen chatting with Samardzija before the game.

"All I can tell him is keep pitching -- pitch your way out of it," Garza, who signed with the Milwaukee Brewers this offseason, told reporters. "Keep your eyes focused, your eyes straight ahead and just pitch. There's nothing else you can do."

Samardzija is winless in five starts this season despite pitching to a 1.53 ERA for the Cubs, who entered play Sunday with a 7-16 record -- the second-worst mark in the majors.

Chicago struggled through the worst three-year period in franchise history from 2011 to 2013, although Garza went 21-18 with a 3.45 ERA with the Cubs over that stretch.

"I told [Samardzija], 'It doesn't matter, dude. You play in Chicago,'" Garza told reporters. "'I was there, and I lost 30 wins in three seasons. It's not your fault. You pitch your way out of there.'"

The Cubs have a talent-laden farm system but also own the 23rd-highest payroll in the majors this season at $89 million.

Samardzija, 29, and the Cubs were unable to agree to a long-term contract this past offseason, avoiding salary arbitration with a one-year deal worth $5.345 million.

Without a long-term deal, Samardzija could end up being a trade chip this season for the Cubs, who have parted ways with multiple high-profile veterans over the last several years, including Garza, Aramis Ramirez and Alfonso Soriano.

Ramirez spent parts of nine seasons with the Cubs before signing with the Brewers before the 2012 season. The two-time All-Star told the Chicago Sun-Times that veterans like himself, Garza and Samardzija prefer not to be part of rebuilding teams like the Cubs.

"We've all been around for a while, and the next thing for us is winning," the 35-year-old third baseman said, according to the newspaper. "We don't want to be in a development situation and a rebuilding process.

Soriano, who was traded to the Yankees last season, said he wouldn't mind being reunited with Samardzija in New York.

"I love Samardzija. I hope he comes here," Soriano told the Sun-Times. "If not here, somewhere he feels comfortable and gets a chance to win, because that's what it's all about.

"At the end of the day, we play to win. We don't play to have fun and just lose. We play to be a champion."

ESPNChicago.com's Jesse Rogers and The Associated Press contributed to this report.