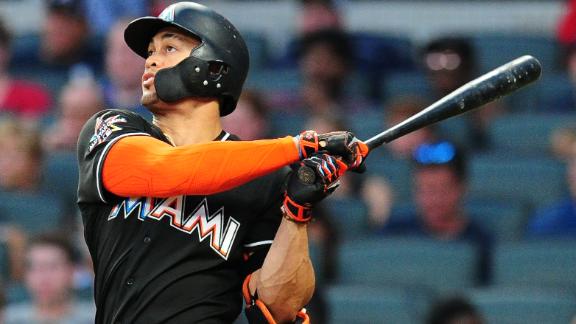 Representatives for the San Francisco Giants and Giancarlo Stanton met in Los Angeles on Thursday night as the Giants hoped to gauge whether the Miami Marlins slugger might approve a trade there, sources confirmed to ESPN's Buster Olney.

The meeting comes with the approval of the Marlins, in accordance with Major League Baseball's tampering rules; it could not happen otherwise.

Stanton,the 2017 home run champion, needs to waive his no-trade clause in order for a deal to go through. He wants to hear what teams have to say as he could be on the move from the cost-cutting Marlins.

The Los Angeles Dodgers and St. Louis Cardinals are among the teams that also have been linked to the reigning NL MVP.

Stanton is owed $295 million over the final decade of his record $325 million, 13-year contract.

The Marlins are under new ownership. Derek Jeter, who became the team's chief executive officer when the group headed by venture capitalist Bruce Sherman bought the team last month, said earlier this month that Miami must cut payroll and is listening to offers for its longtime star.

SiriusXM radio host Craig Mish first reported news of the meeting between reps for Stanton and the Giants.