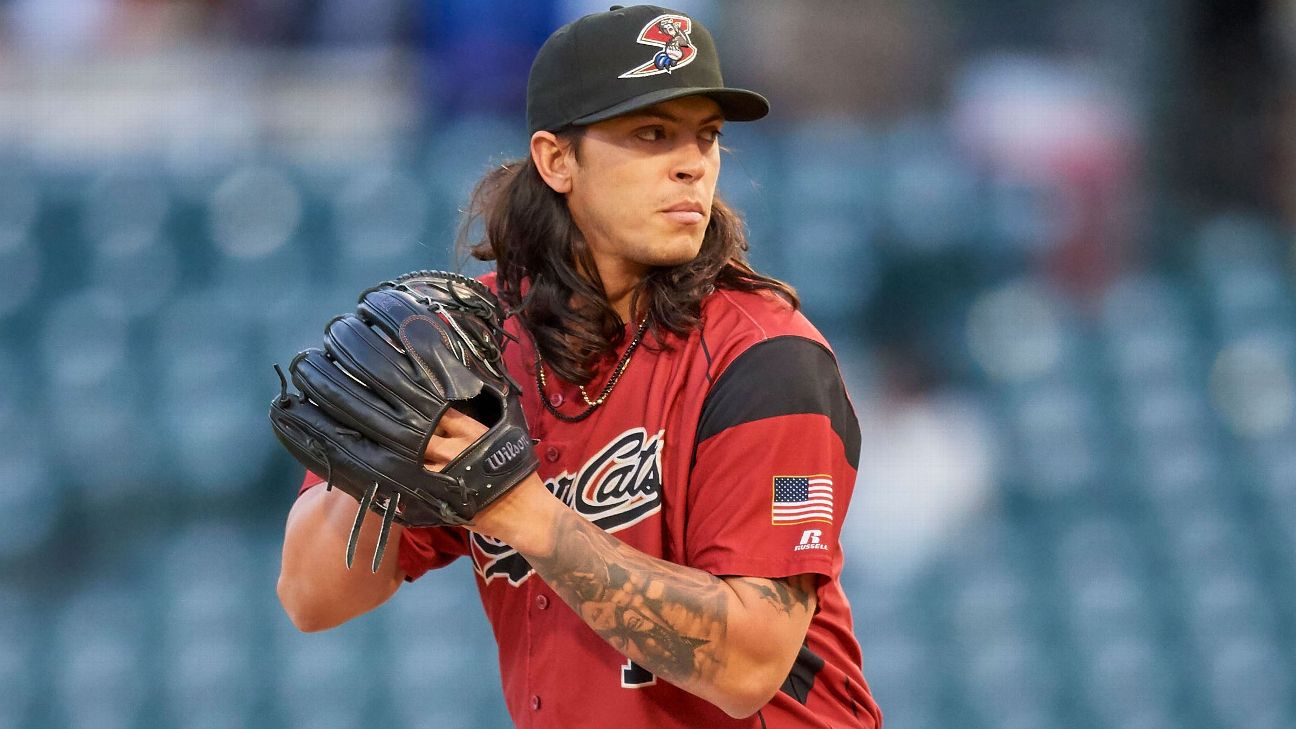 DENVER -- Just to make sure it was real and not some sort of flashback to his childhood, he checked the name above the clubhouse locker.

Yep, it was his all right and not that of his father -- Hall of Fame catcher Ivan Rodriguez.

"I've been to a lot of stadiums. But I wasn't here for me; I was here for my dad," the right-hander said. "It's nice coming here and having my name on the locker and not his."

The San Francisco Giants purchased Dereck Rodriguez's contract from Triple-A Sacramento, where he went 4-1 with a 3.40 ERA after signing as a minor league free agent on Nov. 15. He will be in the bullpen Monday against Colorado, looking to make his major league debut.

His mom has already arrived in Denver. But his father, whose nickname was "Pudge," happened to be out of the country in Colombia. Rodriguez said he spoke to his dad, who was "probably the most emotional out of everybody."

His father was a 14-time All-Star and 13-time Gold Glove catcher who was inducted into the Hall of Fame in 2017. He played in 2,543 games with Texas, Detroit, Washington, theNew York Yankees, Houston and Florida (now Miami).

The father posted on his Twitter account: "Congrats son very proud of you and welcome to the big show."

To make room on the 40-man roster for Rodriguez, the Giants designated left-hander D.J. Snelten for assignment.

Dereck Rodriguez was actually watching Netflix late Sunday and preparing for his start the next day when he received a call from his manager.

"He told me it's the phone call I've been waiting for my whole life," he recounted. "I started tearing up and stuff. It was an emotional, fun phone call."

He quickly called his mom, even though it was early in Florida.

Rodriguez began his career as an outfielder after being selected by Minnesota in the sixth round of the 2011 draft. The 25-year-old transitioned to the mound in 2014.

He was in the Twins system before signing with the Giants. That decision was due in part to conversations with Pablo Sandoval as they worked out in Miami.

"I talked to him and asked him how they were and all that stuff. I know how the guys were, just wanted to hear from an insider," Rodriguez said.

Rodriguez liked what he heard. He's a little surprised at how rapidly he progressed -- nine starts with Sacramento -- but credits his accuracy. He struck out 53 and walked 11 this season.

"It's a great story. Obviously with his dad, making a position change and here he is up in the big leagues now," Giants manager Bruce Bochy said. "As a converted guy, it looks like he's getting a nice feel on pitching. Secondary pitches just got better in the short time he was there. He uses his fastball well and looks like he has good command."

Rodriguez recalled running around the clubhouse in Denver in 2004, when his dad was with the Detroit Tigers.

And now here he is with his own locker.