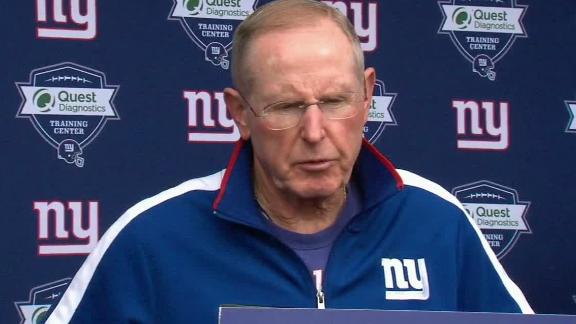 "I think the whole experience is going to have an incredible impression on him," Coughlin said before Giants practice Wednesday. "He's going to learn that there's no place for that kind of activity on the field, as I've said many times before. It's a tough lesson, but he'll learn it."

Beckham was suspended one game for his aggressive and violent actions in Sunday's loss to the Panthers. He appealed the suspension but lost on Wednesday, so he has to sit out Sunday's game in Minnesota and can't have contact with the team until Monday. That punishment, his coach believes, will mean more to him than a fine would.

"I think at this point in time, he certainly will have learned," said Coughlin, who because of the suspension hasn't talked to Beckham in days. "He loves to play, and he does not want the sacrifice of a game. It's going to be extremely meaningful to him."

Beckham issued two separate written apologies following the announcement Wednesday that his appeal had been denied. This will be the first game he has missed since he sat out the first four games of his rookie season, 2014, with a hamstring injury.

Beckham ranks third in the NFL this year with 1,396 receiving yards and is tied for the league lead with 13 touchdown catches.

Coughlin spoke to the Giants about the importance of coming together to overcome the challenge of playing without their best player.

"The bond that occurs between teammates when they're challenged, and this certainly is a challenge," Coughlin said. "We've got to pull together and get contributions from everyone."