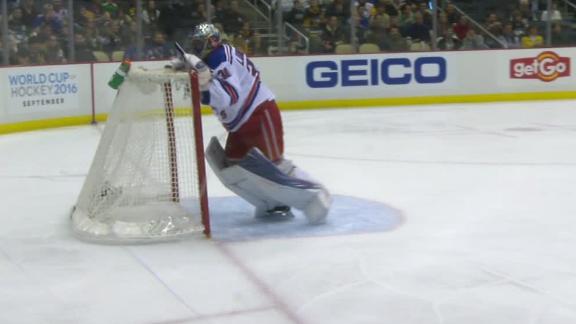 A frustrated Henrik Lundqvist lost his temper and tossed his own goal cage in anger during the Rangers ' 4-1 loss on Thursday in Pittsburgh, where he's had the better part of the Penguins for two seasons.

Visibly upset after colliding with teammate Ryan McDonagh following a Penguins 2-on-1 rush, Lundqvist threw his own net off its moorings into the end boards to get a stoppage in play as Pittsburgh re-entered the zone seconds later, drawing the ire of the home fans.

The Rangers goaltender was whistled for delay of game during the odd second-period sequence. It came after Sidney Crosby, Evgeni Malkin and Patric Hornqvist each scored in a three-goal flurry at the end of the period and helped the Penguins to a rare win against their division rival.

"I think he was trying to tell the referee he was hurt and I don't know if the signals didn't cross or whatever, but obviously the referee didn't pick up on it and he wasn't feeling right,'' Rangers coach Alain Vigneault said.

Lundqvist started each of the last 13 games against Pittsburgh and allowed just three goals on 119 shots during the previous four meetings. That included a 34-save effort last month for his fourth career shutout against the Penguins. He made 19 saves through two periods Thursday before Antti Raanta took over and stopped three shots in the third.

Vigneault said Lundqvist was experiencing neck spasms after the second period and the trainers thought it would be best to hold him out during the third.

"I don't think it's anything serious, but they wanted to go on the safe side, so we took him out,'' Vigneault said.

When asked if he'd react similarly to Lundqvist out of frustration if there was no stoppage in play or an opponent was able to rattle him, Pittsburgh counterpart, Marc-Andre Fleury, responded, "I think that's baby stuff."

"I get mad," the Pittsburgh Post-Gazette quoted Fleury as saying. "I get disturbed. I'll smash my stick, but I wouldn't push the net over and stop play and get a penalty."

Crosby's initial shot on his second-period goal bounced off the end boards and the Penguins captain, circling around the net, redirected the puck toward the goal, where it hit off Lundqvist's skate and went across the line.

Pittsburgh scored a power-play goal with 34 seconds left in the period when Hornqvist tippedPhil Kessel's point shot behind Lundqvist, making it a 3-1 game.