If cleared, Colt McCoy will start 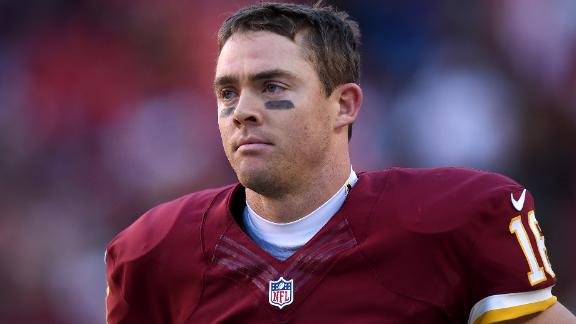 Tests this week showed no structural damage in McCoy's neck, injured midway through the fourth quarter Sunday against the Rams, when he was sacked from behind by St. Louis defensive end Robert Quinn, one of six sacks on the day against McCoy.

McCoy will see a doctor, just as a precautionary measure to make sure his neck is fine.

"We've had looks at all three quarterbacks and based on what we have seen out at practice, for the whole training camp and offseason and the game situations, right now we feel Colt is in the lead," Gruden said. "So if he's healthy and gets a clean bill of health then he will be our starter."

When asked if he should play Griffin "to see where he's at", Gruden replied: "I know where he's at. ... We've seen a lot of him and if he gets another opportunity to play -- which could happen, it could happen as soon as the first quarter of this game, it could happen next week, I don't know -- but our decision is to go with Colt and see how he does. The rest of it will take care of itself."

McCoy was able to take part in Wednesday's practice.

"I threw the ball well," McCoy said. "It never was a shoulder. I'm just dealing with a little aggravated disc, an aggravated nerve in my neck. If that calms down, we'll be fine."

McCoy spent Monday and Tuesday getting his neck checked out by various doctors and a specialist. He said doctors have told him he doesn't risk further injury.

"I'm doing a lot better," McCoy said. "It has to continue to calm down. But I've seen significant recovery over the last few days."

McCoy To Start If Medically Cleared
Redskins coach Jay Gruden says QB Colt McCoy will start Sunday against the Giants if he is medically cleared in time.