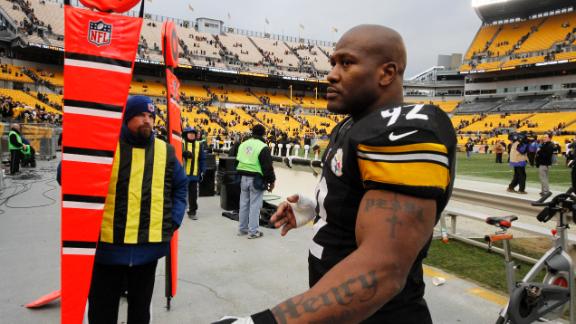 PITTSBURGH -- James Harrison officially rejoined the Pittsburgh Steelers on Tuesday morning, signing a contract in the same building where he announced his retirement less than three weeks ago.

Harrison announced his return on his Instagram account and posted a picture of himself signing a contract.

The Steelers later confirmed the signing and said he would wear his familiar No. 92, reclaiming it from rookie nose tackleDaniel McCullers.

The Steelers brought back Harrison, 36, for a second stint after placing second-year outside linebacker Jarvis Jones on the injured reserve/designated for return list Monday.

Jones dislocated his wrist in the Steelers' 37-19 win over the Carolina Panthers on Sunday night, and the second-year linebacker had surgery Tuesday morning. The 2013 first-round pick will miss at least eight weeks, necessitating the move by the Steelers to re-sign Harrison.

Arthur Moatswill start in place of Jones, but Harrison will become the Steelers' primary backup at outside linebacker.

Harrison is second on the Steelers' all-time sacks list with 64, trailing only Jason Gildon (77), when considering statistics after 1982, when sacks became official. Unofficially, he is fourth behind L.C. Greenwood (73.5) and Joe Greene (66). He made five Pro Bowls from 2007 to '11, and won the NFL Defensive Player of the Year award in 2008.

The Steelers released Harrison in 2013 when the two sides could not agree on a pay cut, and he signed a two-year contract with the Cincinnati Bengals.

"I just think it's going to be great for that defense," Roethlisberger said on 93.7 The Fan in Pittsburgh. "I know he's still got it in the tank because I know how hard James works. I'm excited to have him back."

Harrison played in 15 games for the Bengals last season, starting 10 of them, and he recorded 30 tackles and two sacks.

The Bengals released him in March, and Harrison said several times during the offseason that he wanted to return to the Steelers and finish his career in Pittsburgh.

He announced his retirement via social media at the end of August, and on Sept. 5 Harrison officially retired at Steelers headquarters.

Coach Mike Tomlin said Tuesday that re-signing Harrison was "a simple and easy decision for us."

"We know James. James knows us," he said. "James understands the schemes. We're going to do what he's capable of handling from a mental standpoint and a physical standpoint."

Tomlin said Moats will start at right outside linebacker Sunday against the visiting Buccaneers and that the Steelers will monitor Harrison closely in practice before determining his role.

"It will be no different from the process we went through in re-acclimating [defensive end]Brett Keiselwhen we brought him back," Tomlin said.

"We need to see what he's capable of doing before we etch out any roles for him," Tomlin said.

Harrison Back With Steelers
Ed Werder discusses what James Harrison will bring to the Steelers in the wake of injuries to two of their starting linebackers.