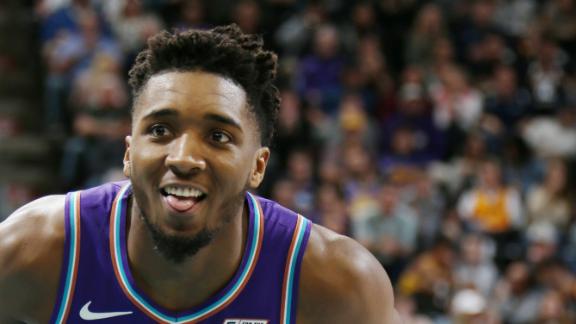 Bojan Bogdanovic added 17 points for the Jazz, and Rudy Gobert had 18 rebounds and six blocks. Utah shot 51% from the field and outrebounded Golden State 48-36.

Golden State rallied from a 21-point deficit and cut it to 111-109 with 22.8 seconds left on back-to-back baskets from Burks and Robinson. Mitchell and Conley each hit a free throw in the final seconds to seal the victory for Utah.

Injuries left the short-handed Warriors with just eight available players. The Jazz took advantage of that limited depth early, connecting on 61% of their field goal attempts in the first half.

Golden State managed to hang with Utah during the first quarter. The Warriors twice took a one-point lead in the period. They went up 20-19 after Burks capped an 8-0 run with consecutive baskets and then claimed a 28-27 lead on a putback layup by Marquese Chriss.

A four-point play from Mitchell helped start a 22-6 run that gave the Jazz a 60-43 lead in the second quarter. Bogdanovic finished off the spurt with back-to-back baskets.

Golden State briefly cut the deficit to single digits in the third, trimming Utah's lead to 69-60 on Eric Paschall's dunk. Conley, Mitchell and Gobert each made a basket over three straight possessions to boost Utah's lead to 76-60.

After the Jazz took a 100-80 lead on a 3-pointer from Emmanuel Mudiay early in the fourth quarter, the Warriors used a 21-6 run to cut the deficit to single digits again. Willie Cauley-Stein dunked the ball for his first basket to finish off the spurt and cut Utah's lead to 106-101 with 2:19 left.

Warriors: Draymond Green (sore right heel) missed his second consecutive game and D'Angelo Russell (right thumb sprain) was sidelined for a fourth straight. ... Burks is 31 of 33 from the free throw line over his last five games. He is a career 77.7% foul shooter. . Golden State outscored Utah 10-0 in second-chance points and 18-8 in fast-break points.

Jazz: Gobert has 17 blocked shots over his last four games. . Royce O'Neale dished out a season-high five assists. . The Jazz committed 21 turnovers, leading to 31 points for the Warriors.