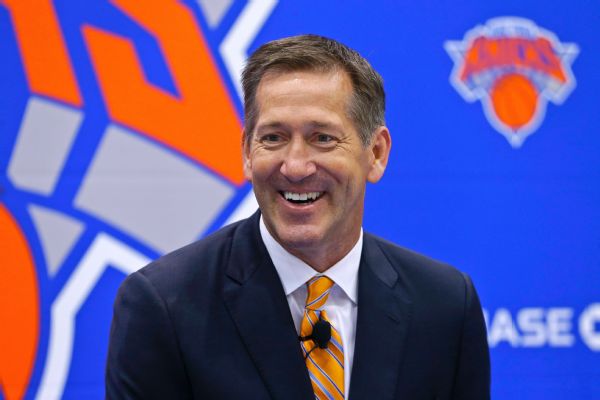 NEW YORK -- New Knicks head coach Jeff Hornacek said that team president Phil Jackson has been "hands off" and "helpful" during the preseason as Hornacek installs a new offense in New York. Hornacek's new approach employs less of the triangle offense, which Jackson used to win 11 NBA titles as a head coach.

"Phil's been great. He's not trying to take over and make us do anything. He's given us the leeway," Hornacek said after practice Sunday. "There are some things that we do that aren't the triangle stuff [such as] our early [offense]. Quite honestly, we thought he would say, 'Let's not do that.' Or, 'Let's not do that option.' But he hasn't said that at all."

Hornacek has run "aspects" of Jackson's triangle offense in the preseason while encouraging the Knicks to increase their pace and hunt for opportunities for easy shots early in possessions. Hornacek says Jackson has been supportive of his new wrinkles, and has aided in the teaching of the triangle offense.

"We talk quite a bit, but he's been hands off," Hornacek said. "He gives some directions here and there. If he sees something or he says, 'Hey, let's take a look, clean this up, this particular action.' So it's good.

"It's another coach out there -- he's run it for years and years, so when he sees something -- really, he's not coming in there saying, 'Hey, change it to this,' or 'Change it to that.' It's good, additional information."

Hornacek, whom Jackson hired in June after firing his first head coach, Derek Fisher, said Jackson has given the Knicks "hints" on how to execute the triangle offense, which the club uses to space the floor in half-court sets.

"I think our guys are getting used to it," he said.

The triangle has been the subject of public ridicule during the past two seasons as the Knicks have stumbled to a combined 49 wins while running it. Privately, some Knicks complained about the offense last season because of its slow pace and predictable sets, according to sources.

Hornacek on Sunday acknowledged the criticism of the offense and also defended it, noting that many teams run elements of the triangle in their offense.

"A lot of teams throw it in the post, run splits and cut and do that. So there are some other aspects of it [in many offenses]," Hornacek said, adding that some of the criticism stems from the offense's slow pace.

"If it slows you down, I think that's where most guys [who critique the triangle] are probably coming from," Hornacek said. "You end up being a slow-down team and never get easy buckets, and you're running that half-court set all the time. First of all, guys don't like to run it. Secondly, it makes it very difficult to get easy buckets early in the offense. And I think in today's game, those early buckets are nice to get."

The Knicks have ranked in the bottom third in the league for pace during the past two seasons while running the triangle. Hornacek is trying to speed the offense up this season, in part to play to the strengths of guards Derrick Rose and Brandon Jennings.

"We're not running it every time," he said of the triangle. "We're mixing it in here and there, and hopefully for us it's a good thing we can do to execute a play on a dead ball that we have something to go to [in half-court sets]."

Hornacek added that the frequency with which the Knicks use the triangle this season could change "game-to-game."