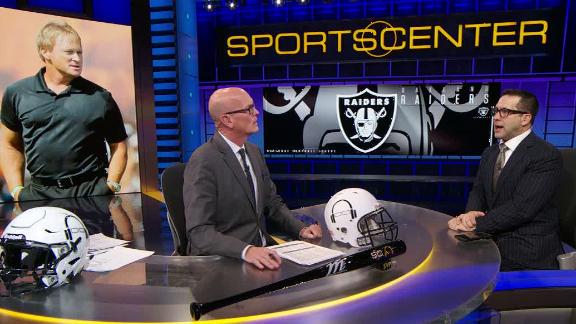 ALAMEDA, Calif. -- Jon Gruden is expected to become the next head coach of the Oakland Raiders, a source told ESPN's Adam Schefter.

Gruden, who coached Oakland from 1998 to 2001, would return to the Raiders to replace Jack Del Rio, who was fired after Sunday's loss to the Los Angeles Chargers.

ESPN reported Saturday that Raiders owner Mark Davis was prepared to pursue Gruden with a strong offer that could include an ownership stake in the team.

Gruden, who currently works as an ESPN analyst, declined to specifically comment about the Raiders this past weekend, saying "there is no news to report."

A contract including an ownership stake would have to be approved by NFL owners. The Raiders also still have to interview candidates for the job and meet the requirements of the Rooney Rule.

"I know him," Raiders star quarterbackDerek Carrsaid Sunday when asked about the Gruden reports. "I've known him for a while. But it's still pretty fresh [with Del Rio being fired]."

The Raiders concluded Del Rio's three-year tenure with the team -- and completed a disappointing 6-10 season -- with their 30-10 loss to the Chargers. Del Rio signed a four-year contract extension last offseason.

"Today was kind of a microcosm of our season," Del Rio said Sunday. "The opportunities and lack of production really not good enough, really disappointing."

Del Rio said Davis informed him of his firing after Sunday's game.

"He told me he loved me and appreciated all I did to get this program going in the right direction, but that he felt the need to change," Del Rio said. "I told him how much I appreciated the opportunity he gave me; very grateful, my childhood team.

"But it's a results business. I understand that."

Davis released a statement, saying: "We appreciate Jack's effort in building the foundation of this team for the future. Thank you to Jack, his wife, Linda, and his daughter, Aubrey, for their important contributions to the Raiders and our local community in Oakland. We wish them all the best."

The Raiders had high expectations coming into the 2017 season after improving from 7-9 in Del Rio's first year to 12-4 in 2016, the franchise's first playoff appearance in 14 years.

But Carr regressed under first-year offensive coordinator Todd Downing, and Ken Norton, Jr. was fired as defensive coordinator after 10 games. The Raiders got next to nothing out of their first- and second-round draft picks: Cornerback Gareon Conley and safety Obi Melifonwu played a combined seven games and both ended the season on injured reserve.

"It hurts when something sucky happens to someone you care about. We weren't good enough for him," Carr said of Del Rio after Sunday's game. "We have to take our ownership as players and I think that's where we're at right now. We're kind of angry that we let it get to that and we're upset at ourselves. We understand the business part of it. But as players -- I talked withKhalil Mack-- our job is to come back better and hungry. We've been through some hard times together, and this is right up there with it."

Running backMarshawn Lynch, who came out of retirement to sign with the Raiders before the season, said of the firing, "It's a business."

Mack, named to his third straight Pro Bowl, said he would "keep my thoughts to myself" when asked about Del Rio's firing. 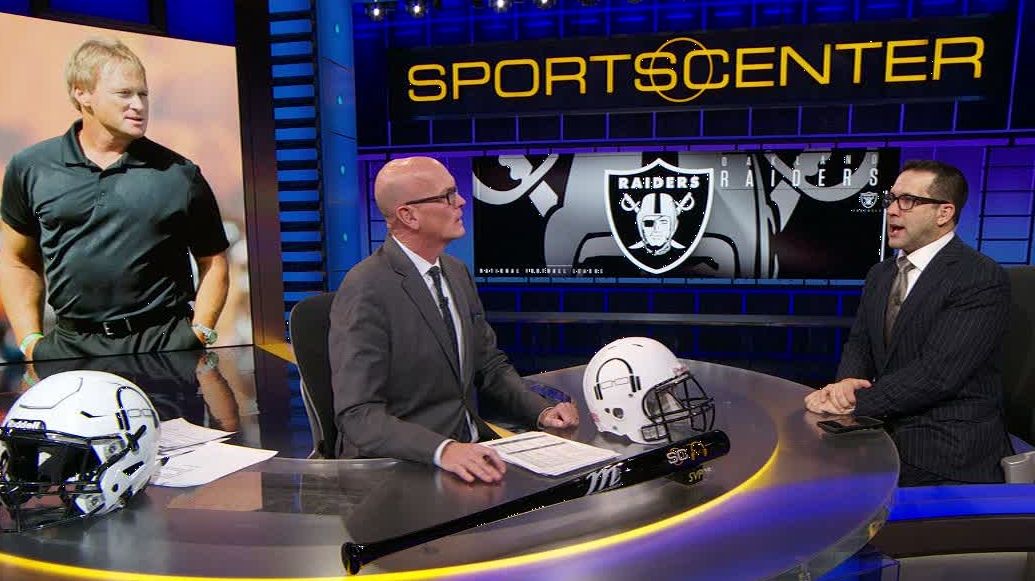 Schefter: 'Gruden will be the next coach of the Raiders'
Adam Schefter joins SVP and says the Raiders wouldn't fire Jack Del Rio without being convinced they can land Jon Gruden as head coach.

Del Rio fired as Raiders' head coach
Jack Del Rio says that owner Mark Davis informed him that he will not be bringing him back as their coach for next season.