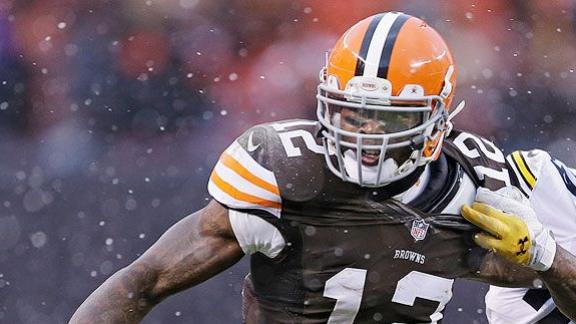 Cleveland Browns wide receiver Josh Gordon is facing a season-long suspension after another failed drug test months ago, this time for marijuana, sources told ESPN's "Outside the Lines" on Friday.

Reached by phone Friday afternoon, Gordon said: "That's something you're going to have to talk to [agent] Drew Rosenhaus about. I really don't know anything about it."

Asked whether he planned to dispute the test, Gordon said: "I'm going to have to find out about that later. You need to call Drew." Gordon then hung up the phone.

Rosenhaus declined to comment on the specifics of the matter.

A spokesman for the NFL Players Association declined to comment.

The 23-year-old Gordon was expected to be the top target for quarterback Brian Hoyer or newly drafted Johnny Manziel this season. Manziel was taken with the No. 22 pick in Thursday's NFL draft. Earlier in the night, Cleveland traded out of the No. 4 spot with the Buffalo Bills, who used the pick on wide receiver Sammy Watkins.

The Browns' coaching staff, meanwhile, was unaware of the situation until ESPN.com issued its report, sources said.

Speaking after Rounds 2 and 3 of the draft Friday night, Farmer said he would not comment on the Gordon report. The GM added that he drafted based on the way he had ranked players, and always would.

Like in the first round, the Browns did not select a receiver Friday night.

Farmer also was asked when he might have clarity on Gordon's situation.

"I don't know the answer to that question," he said. "Whenever we do have clarity we will express our sentiments then."

Despite being suspended without pay for two games and losing two additional game checks last season for his earlier violation of the league's drug policy, Gordon led the Browns with 87 receptions and had nine touchdowns. He led the NFL with 1,646 receiving yards and became the first player with consecutive 200-yard receiving games.

He said last year's suspension was the result of using cough syrup that contained codeine -- a banned substance under the NFL's policy.

Two sources told "Outside the Lines" on Friday that Gordon's latest violation is the result of marijuana being found during a drug test. One source said Gordon received a letter in early winter from a league physician stating he had failed a test. A second letter, informing Gordon that he faced a 16-game suspension but had the right to appeal, was sent in late April.

Gordon had drug-testing problems in college as well. He was dismissed from the team at Baylor after being suspended twice for marijuana use. He transferred to Utah but didn't play there after failing another drug test.

Gordon is considered the star on an offense that added Manziel on Thursday night.

Prior to the draft, Gordon pushed behind the scenes for the Browns to get the former Heisman Trophy winner.

"I think I was just a big fan of his overall game, his prowess on it," Gordon said Friday on "SVP & Russillo" on ESPN Radio, before "Outside the Lines" reported the substance-abuse policy violation. "His outlook on it. His fire and ambition and will to win was greater than I think any other prospect in the draft.

"Despite all the mixed reviews and the media downsizing him, his perseverance seemed to be a lot greater than that. I saw something a lot deeper than just his talent that could take us to the next level."

The potential Gordon suspension isn't the only bad news the Browns have received.

Wide receiver Nate Burleson recently fractured his left arm in minicamp, sources familiar with the situation told Mortensen. The fracture is in the same arm Burleson broke last season. It is not expected to keep him out of the start of training camp, but he is expected to miss the remainder of the offseason program.

Source: Josh Gordon Faces Season Ban
Ron Jaworski discusses the impact on the Browns if Josh Gordon is suspended for a full season.