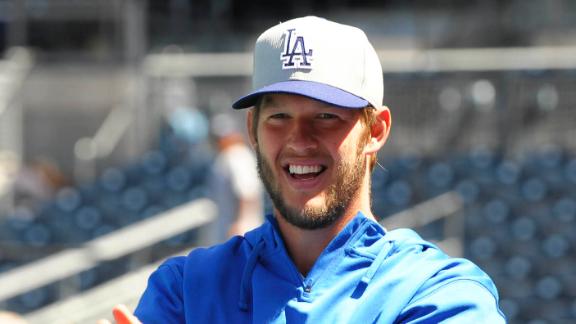 Kershaw, the Los Angeles Dodgers' ace, has been on the disabled list with an upper back problem, but he threw a simulated game Sunday at Dodger Stadium at maximum effort and reported no problems afterward. The Dodgers are reluctant to announce it, but as long as Kershaw feels no discomfort the day after, a rehab assignment is in his near future seems likely.

Kershaw threw a normal warm-up as he would before a regular start, then threw about 50 pitches to hitters, topping out at around 90 mph. He threw all his pitches.

The Dodgers training staff had held back Kershaw from throwing at max effort, but Sunday they let him go full tilt, something the left-hander has wanted to do for some time but had been advised against. Because it was his first time pitching without restrictions since his Opening Day start in Australia nearly a month ago, the original plan was to have Kershaw throw two simulated innings.

But after a long conversation with manager Don Mattingly, head trainer Stan Monte and team physician Dr. Neal ElAttrache, after those two frames, Kershaw pitched a third without issue.

Kershaw speculated the next step might be a rehab assignment, but as the team has done throughout this process, the Dodgers are being extra cautious.

The off days early in the season have helped the Dodgers manage their rotation, but it hasn't come without some taxing of the bullpen. With that in mind, and with only one off day in the next 24 days, the team wants to make sure Kershaw can give them more than just a cameo appearance.

"That's an area for Stan and the doctors to say we need to get this built up to a certain point," Mattingly said. "I'm sure they are going to want him to be able to compete, and not go out there and throw four innings."