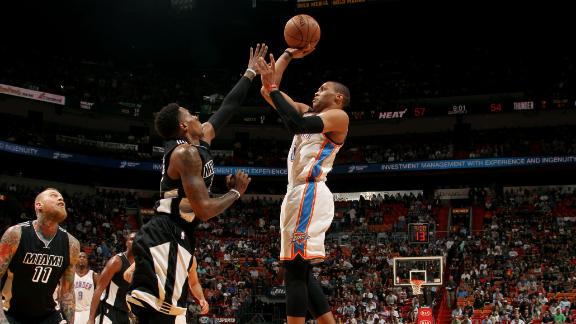 Durant injured the elbow when he landed awkwardly after beating Dwyane Wade to the basket for a dunk with 9:33 left Tuesday in the Thunder's 94-86 win over the Miami Heat.

The league's reigning MVP immediately rolled onto his back and remained on the floor for several seconds before teammates and trainers helped him to his feet and escorted him toward the bench.

Durant continued to play until he was taken out of the game with 1:19 left and the Thunder holding a 10-point lead.

After the game, Durant said he was a little sore but would be available for OKC's game against Washington in the second game of a back-to-back set.

The Thunder certainly can't afford another injury scare as they try to catch Phoenix in the Western Conference standings.

OKC has won three straight and four of its past five games, but still trail the Suns by three games for the eighth and final playoff spot heading into the second half of the season.

Tuesday's win in Miami moved the Thunder (21-20) above the .500 mark for the first time during their turbulent, injury-riddled season.

Durant missed the first 17 games of the season to recover from foot surgery, and another six last month with an ankle injury on the same right foot. Russell Westbrook, who had 19 points and 10 rebounds against Miami, missed 14 games this season with a broken hand.

Thunder coach Scott Brooks said he believed Durant was fouled on the play. But replays showed Wade didn't touch Durant as he raced in for the dunk, with his momentum carrying him beyond the basket.

Brooks said he decided to take Durant out of the game late in the fourth quarter because OKC had a comfortable lead and he was approaching 40 minutes with a game the following night.

"I wasn't nervous," Brooks said of seeing Durant on the ground for several moments. "Kevin is as tough as anybody in this league. He's been hit hard going to the basket many times. He's always bouncing up. He went down the court, kept his composure and kept playing."

The Thunder are 13-5 in games Durant has played and are 2-0 on a five-game trip that finishes this week against three of the top teams in the East in Washington, Atlanta and Cleveland.