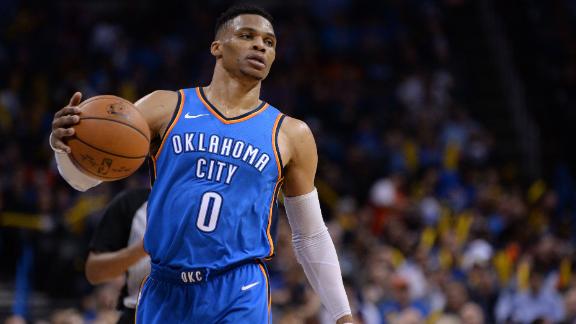 OKLAHOMA CITY -- It wasn't an emphatic slam-the-door kind of crunch time for the Golden State Warriors, but it was an effective one. And really, a lot of it was kind of just letting the Oklahoma City Thunder do what they've done so often this season -- beat themselves.

Kevin Durant led the way with 34 points and 10 rebounds, withKlay Thompson adding 20 points, as the Warriors beat the Thunder 111-107on Tuesday, outlasting a furious attempt by Russell Westbrook (44 points, 16 rebounds and 6 assists) to drag his team over the finish line.

The box score says it came down to a duel between Westbrook and Durant, every NBA fan's fever dream, but the deciding plays of the game featured what Durant's teammates did -- and what Westbrook's didn't.

Westbrook played his part, trying to energize the Thunder, scoring 17 in the third quarter as he led OKC back from a 10-point halftime deficit. It was clear the Thunder needed an adrenaline jolt, and that's something Westbrook specializes in. He thrives in messy and slightly chaotic environments, and when the signal goes up, he relishes answering it.

But with Carmelo Anthony and Paul George struggling, shooting a combined 9-of-35, including 3-of-18 from 3, the Thunder eventually ran out of chances. It wasn't that the offense stalled or the shots were bad -- they just didn't go in.

"I take it on myself," George said. "We've got to do a better job of helping Russ.

"[Westbrook] was great, he was great. He took it to another level, a level those guys didn't have an answer for. It's frustrating when we see that and notice that and we can't help him by making shots and putting the ball in the basket."

That's something that has perplexed the Thunder all season, these games where good shooters miss a lot of good shots. George has fallen victim to it often, starting the game hot, then getting mostly the same looks and missing them. He talks a lot about rhythm, but for whatever reason, he seems to slip in and out of it over the course of a game. Anthony got the kind of looks the Thunder want -- spot-ups from the perimeter -- but missed all of them.

"I've got to figure it out," George said of his recent shooting struggles. "There's something mechanical in my shot. I've had struggles throughout the season and my career of shooting, but it's all just been about not making shots. I don't know what it is. It feels funny. Shooting the ball feels funny. So I'm going to work with the trainers and try and figure that out. But I don't feel myself shooting the ball right now."

And that was the dramatic difference. The star-driven Thunder didn't see their stars perform, while the Warriors got solid games out of Durant and Thompson, with the secondary players stepping up. Quinn Cook was steady, hitting his free throws, a big corner 3 and a tear-drop late. Jordan Bell finished a dunk set up by quality offense. David West was his usual steady self.

"It was a great win, short-handed and on the road against a good team fighting for playoff position," Warriors coach Steve Kerr said. "It's a hell of a win, especially without all our guards. I loved how these guys played and competed."

Without Stephen Curry, Andre Iguodala, Shaun Livingston and a few others, the Warriors were going to have to focus in three main areas: Durant being great, Thompson being hot for a few stretches, and playing excellent defense. They definitely checked those boxes, especially in the second quarter as the Thunder shot just 6-for-26 while Durant poured in 24 first-half points. Durant cooled in the second half as the Thunder trapped him at every opportunity, but there was just enough around him, combined with George and Anthony shooting so poorly, to get it done.

For the Warriors, it's a validating win to go on the road and play well against a desperate team sans Curry. But for the Thunder, it's an excruciating loss, and one that kind of summarizes their season. They lost in the margins, missing nine free throws, missing great looks and not coming up with the critical stop or loose ball.

There were a number of little moments that kept OKC from taking control. There was Westbrook diving out of bounds to save the ball, which he threw right to Durant and led to a Thompson 3. Or after a big stop, Raymond Felton tried to hit one of three Thunder players leaking out for a would-be layup, only to have the ball get knocked in the air and turned into a West layup. Or with a minute left when the Thunder had cut their deficit to four after two George free throws and got the needed stop but couldn't completely secure the rebound. The ball got loose, was batted around, and Corey Brewer poked it out of bounds.

That's what has left the Thunder so frustrated with their predicament. As in Tuesday's game, they really only need to look in the mirror. The issues are on them, and are all correctable ones. But they've left themselves in a precarious spot, all but kissing goodbye to a chance at home court in the opening round, with the reality of missing the postseason altogether still looming on the other side.

"We're not worried about that -- we're just going to take one game at a time," Westbrook said. "We'll be here in the postseason ready to go."

There was some talk about the Warriors fearing the Thunder as an opening-round opponent because of Curry's absence, but if this was a preview, there are two ways to look at it: The Warriors could worry because the Thunder easily could correct the issues that sunk them on Tuesday, or they could take heart and look at OKC's body of work and feel fine about it.

"We figured it out. We good," Westbrook said. "As long as we're good in this locker room, regardless of what anybody says outside this locker room don't matter. As long as we're good as a team, as a unit, as brothers, we have a great relationship on and off the floor, so that's all that matters. Anything outside this building, outside our arena don't really matter, don't change anything that we're doing."

The Thunder have told themselves all season that eventually they'll snap out of it, that the off nights and bad breaks will balance out. But this was game 79 of 82. Time has just about run out.

Westbrook's 44 points not enough to beat Warriors
Russell Westbrook goes off for 44 points and 16 rebounds, but the Thunder fall at home to the Warriors 111-107 behind Kevin Durant's 34 points and 10 rebounds. 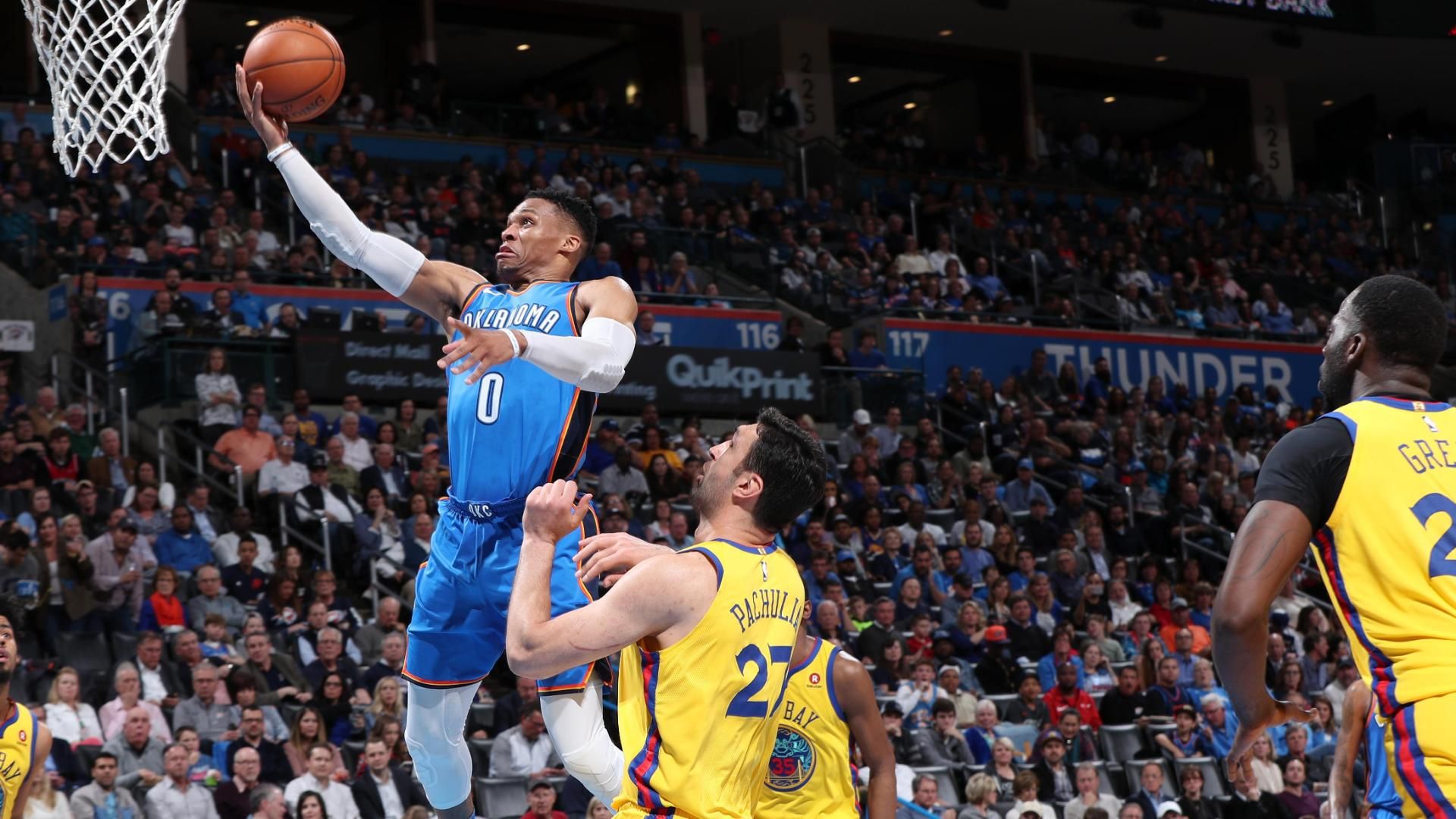