Klay: Injury didn't affect me, 'got to dig deep' 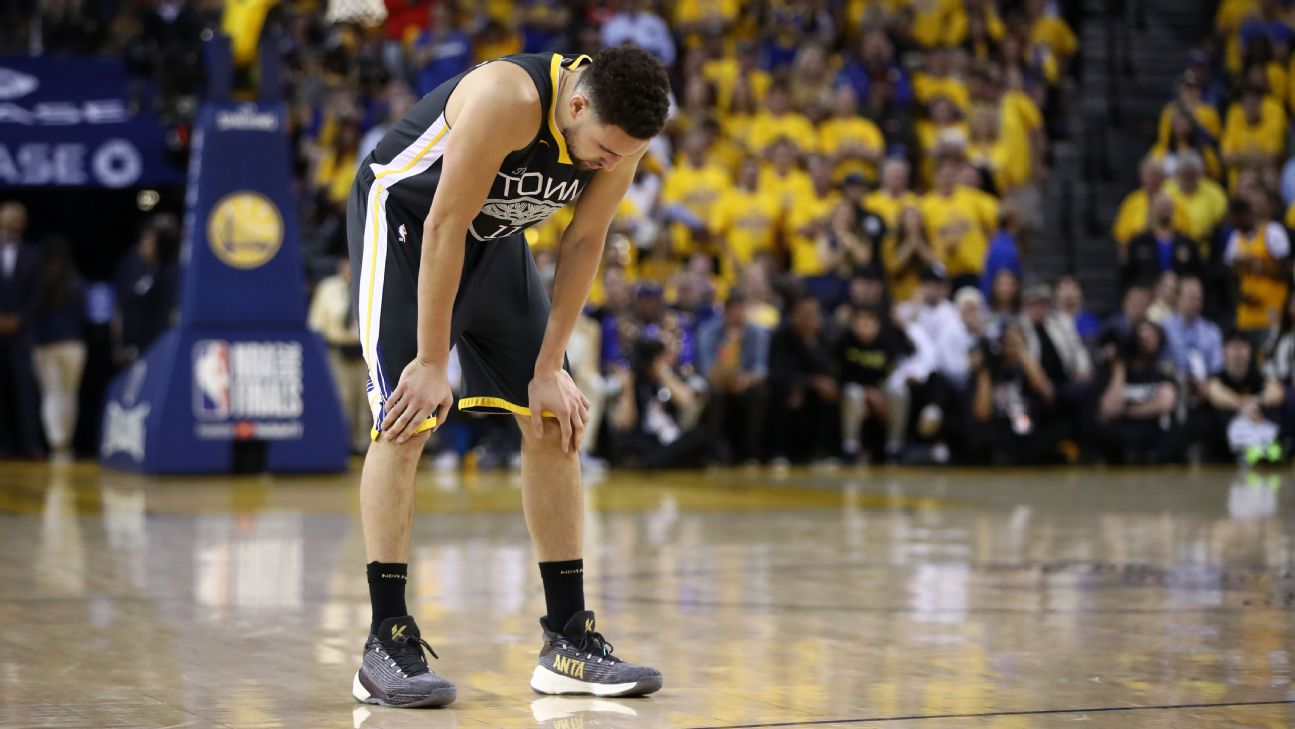 ESPN
By Nick Friedell
OAKLAND, Calif. -- Playing on an injured left hamstring, Golden State Warriors swingman Klay Thompson scored 28 points in his return from a one-game absence, but it wasn't enough to will his team past the Toronto Raptors in Friday night's 105-92 loss in Game 4 of the NBA Finals.

The fact that Thompson, who hurt his hamstring in Game 2 and missed Game 3 because of the injury, was able to play and produce at such a high level over 42 minutes on Friday made a lasting impression on his teammates and coaches.

Likewise for forward Kevon Looney, who scored 10 points and grabbed six rebounds in 20 minutes while playing with a nondisplaced first costal cartilage fracture on his right side.

Like Thompson, Looney suffered the injury in Game 2, was ruled out for the series before Game 3 and then gutted out a return after the organization decided he could do no further damage to the area.

"Klay was amazing," Warriors coach Steve Kerr said. "With a tweaked hamstring, to do what he did. Looney as well, coming in and playing 20 minutes, given his injury status. So both those guys are -- they're warriors. No pun intended. They just compete, compete, compete, and I'm really proud of both of them. Both played really well, but again, it wasn't enough in terms of our team effort."

The Warriors were hopeful that Thompson would be able to produce, but as Kerr noted before the game, they were going to watch him closely to make sure he was moving well on both ends of the floor.

"It didn't affect me," Thompson said of his injury. "Like I said before, it's the Finals. It's a long season. You play 100-plus games, you're going to be banged up. But you just got to dig deep. No one's going to feel sorry for you, so you just got to go out there, man up and play to the best of your ability."

Looney acknowledged that his injury started to cause some issues down the stretch of the game, but he still managed to make some plays despite dragging his right arm at times throughout the night.

"It was pretty tough," Looney said. "The first half it was pretty good. The adrenaline was going. Little sore in the fourth. You've just got to block it out and do your job."

The Warriors remain hopeful that injured star forward Kevin Durant might be able to return for Game 5 on Monday as he continues recovering from a right calf injury. The issue for the Warriors is that Durant still hasn't been cleared to practice, and his teammates understand that they have to prepare as if he isn't coming back for the rest of the series.

"As far as KD, there's been hope that he would come back the whole series," Warriors forward Draymond Green said. "So that's not going to change. We hope to have him, but, you know, we'll see what happens. We don't make that final call. S---, he don't even really make that final call. His body will tell him if he can get out there or not. And if he can, great. And if not, we still got to find a way to win the next game."

All the optimism regarding both Durant's potential return and the Warriors' ability to come back in this series has been muted over the past two days. After Game 3, the Warriors were optimistic that Durant would be able to participate in 3-on-3 scrimmages and be cleared to play Friday. Now they aren't sure if he'll be able to return at all.

With a loss in Game 4, the Warriors -- down 3-1 in this series -- face the possibility that they've played their final game at Oracle Arena. The Warriors will move to Chase Center in San Francisco after 47 years playing in Oakland. The finality of the situation was felt inside the Warriors' locker room as the group dressed, showered and left the arena faster than they have all season. It was as quiet a setting inside the locker room as there has been.

The Warriors face the unenviable task of trying to extend the series by winning Game 5 on Monday in Toronto.

"You don't succeed the way we have over the course of these years without that mentality," guard Stephen Curry said, brushing off the idea that the Warriors were shocked by what has happened. "So as the second half unfolds and things aren't going our way, we're still fighting and trying to get over the hump. But until the final buzzer sounds and somebody gets the four wins, we still have life and have an opportunity to win.

"So, like Klay said, nobody's going to feel sorry for us at all. It's just a matter of can we get it done or not, and we're going to leave it all out there starting on Monday." 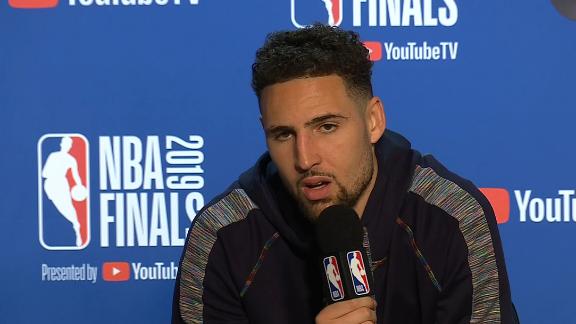 Thompson: Injury 'didn't affect me' in Game 4
Klay Thompson says that his injury didn't affect his performance during Game 4, and he credits the Raptors for playing tough. 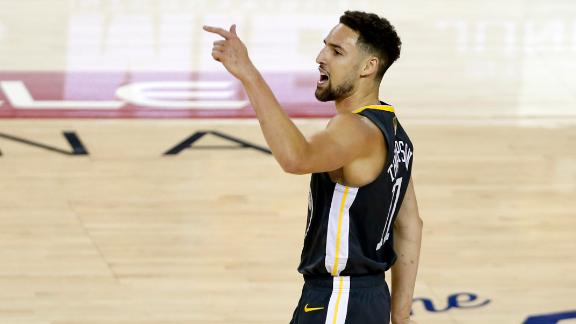