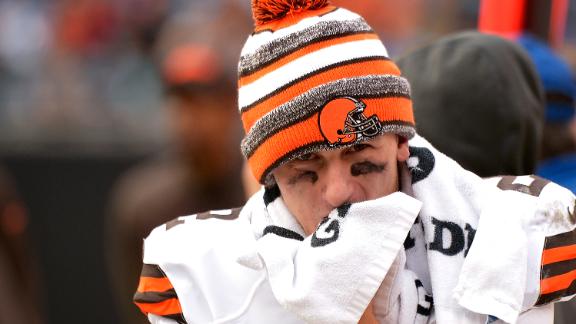 FLOWERY BRANCH, Ga. -- New Atlanta Falcons offensive coordinator Kyle Shanahan declined to share specifics about what led to his departure from the Cleveland Browns, but he spoke out favorably for embattled quarterback Johnny Manziel.

"Johnny's a great guy, and I think he does get a little bit of a bad rep with that, because Johnny worked very hard for me," Shanahan said. "I really enjoyed coaching him."

"I don't know what he's going through right now, but I think I'm confident Johnny will work it all out," Shanahan said. "And I think he has a chance to have a good future."

Shanahan asked to be let out of his Browns contract with two years remaining. Friction between the front office and coaching staff reportedly led to the departure, although Shanahan declined to confirm this.

He reportedly wasn't happy with Manziel being forced on him as the starter. The Browns also are under investigation for violating rules for texting from the press box to the sideline, an investigation focused on general manager Ray Farmer.

Shanahan did not speak negatively about any situation related to the Browns. He said there were a lot of things he enjoyed about Cleveland, which made it a difficult decision to leave.

"The fact that it's led me to Atlanta and I'm in this situation right now, I couldn't be any happier."