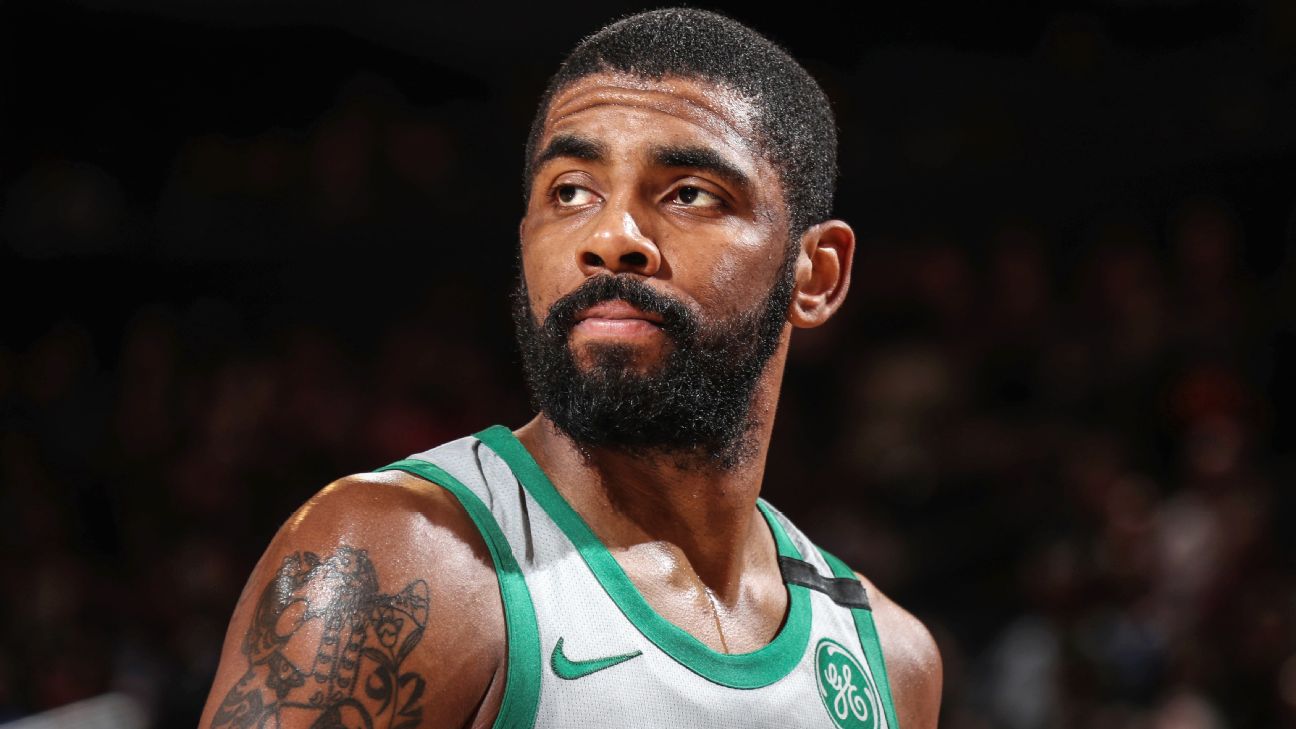 BOSTON -- In the wake of Stephen Curry's controversial comments doubting that humans landed on the moon, Boston Celtics guard Kyrie Irving -- who knows firsthand how a quote can become a national storyline -- said at times it can be challenging for athletes to speak their minds.

"There's world hunger going on, there's political things going on, there's so many higher things going on in the totem pole of society that matter to human beings," Irving said after the Celtics' practice Tuesday. "But, hey, Steph Curry says he doesn't believe in the moon [landing], it's the thing all over. It's on CNN. And they say that we're just jocks. We're just athletes. But it's on your channel. So you know what I mean? Like we're that, but you don't want us to be that."

Curry's initial comments about the moon came on The Ringer's "Winging It" podcast earlier this month. Later, after NASA invited him to tour the lunar lab at the Johnson Space Center in Houston, the Golden State Warriors star told ESPN's Nick Friedell he was joking about the entire thing.

"But in terms of the reaction that I've gotten, I am definitely going to take [NASA] up on their offer. I am going to educate myself firsthand on everything that NASA has done and shine a light on their tremendous work over the years. And hopefully people understand that education is power, informing yourself is power. For kids out there that hang on every word that we say, which is important, understand that you should not believe something just because somebody says it. You should do your homework and understand what you actually believe."

Irving had a similar controversy in February 2017, when -- during an appearance on the "Road Trippin'" podcast with then-teammates Richard Jefferson and Channing Frye--he said that he believed the Earth is flat.

Those comments -- like Curry's -- quickly took on a life of their own, and became one of the biggest topics of that year's All-Star Weekend, with both LeBron James and NBA commissioner Adam Silver weighing in. Irving eventually apologized for his comments at a Forbes Under 30 event here in October, saying he'd failed to grasp the power of his words in the public sphere before saying them.

"Even if you believe in that, don't come out and say that stuff. That's for intimate conversations because perception and how you're received, it changes. I'm actually a smart-ass individual," he said in October. "At the time I didn't realize the effect. I was definitely at that time, 'I'm a big conspiracy theorist. You can't tell me anything.' I'm sorry about all that. For all the science teachers, everybody coming up to me like, 'You know I have to reteach my whole curriculum!' I'm sorry. I apologize. I apologize."
Report a correction or typo
Related topics:
sportsespncsstepgmoonstephen currygolden state warriorskyrie irvingespnw sportsceltsboston celticsnba
Copyright © 2022 ESPN Internet Ventures. All rights reserved.
TOP STORIES
Renter scams using Zelle to receive money from victims
ABC7's new 24/7 live stream offers local news, weather
Peninsula city plans to kill geese over poop problem
SF motorcycle officer hit by car in Redwood City
New Jersey beach sand collapse leaves teen dead, sister injured
NY teen found dead in SC after 13 years; Sex offender charged
Doctor explains what to know about booster dose for kids 5-11
Show More
High school musician saves Pearl Jam show in Oakland
Airfares are sky-high - will they come back down?
Woman goes viral wearing grandma's honeymoon wardrobe from 1952
ABC7's Dion Lim, AAPI leaders visit White House
Newsom pushes water conservation: 'We have to do things differently'
More TOP STORIES News