LeSean McCoy active, will be on snap count for Bills 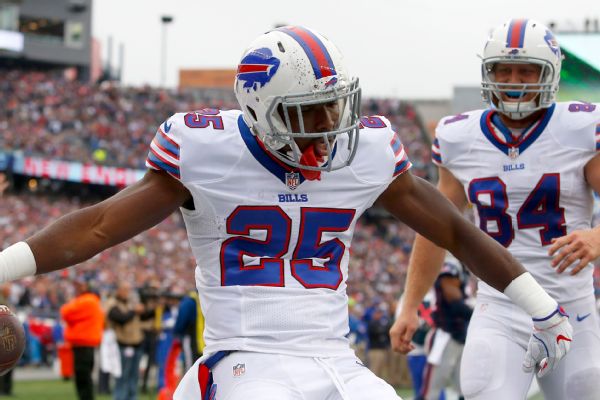 Buffalo Bills running back LeSean McCoywill play Sunday against the Dolphins in Miami, but he could be on a snap count, a source told ESPN's Adam Schefter.

McCoy was listed as questionable for the game after suffering a hamstring injury in practice Wednesday but was not among the team's inactives Sunday.

McCoy could play 25 to 35 snaps, but if he's feeling good, the Bills could allow him to keep running, depending on how the hamstring feels, the source told Schefter.

McCoy traveled with the Bills to Miami on Saturday. That came a day after he returned to practice on a limited basis.

"I just felt all right," McCoy said of his return to practice Friday. "I didn't do a lot of reps today. Just was real limited, just seeing how I feel."

McCoy also hurt his left hamstring in a training camp practice in August 2015, an injury that lingered into the regular season and eventually caused him to miss two games in October.

However, McCoy said his injury this week was "not nearly as bad as [last year]. So that's a good thing."

A well-placed source told ESPN's Josina Anderson on Thursday that McCoy would not play against the Dolphins.

If McCoy is limited Sunday, Mike Gillislee likely will see additional action at running back for Buffalo, which has won four straight.

In other Bills injury news, wideout Robert Woods, listed as doubtful with a foot injury, is inactive. Fellow receiver Justin Hunter is expected to start.

Defensive tackle Marcell Dareus, listed as doubtful with a hamstring injury, is inactive.