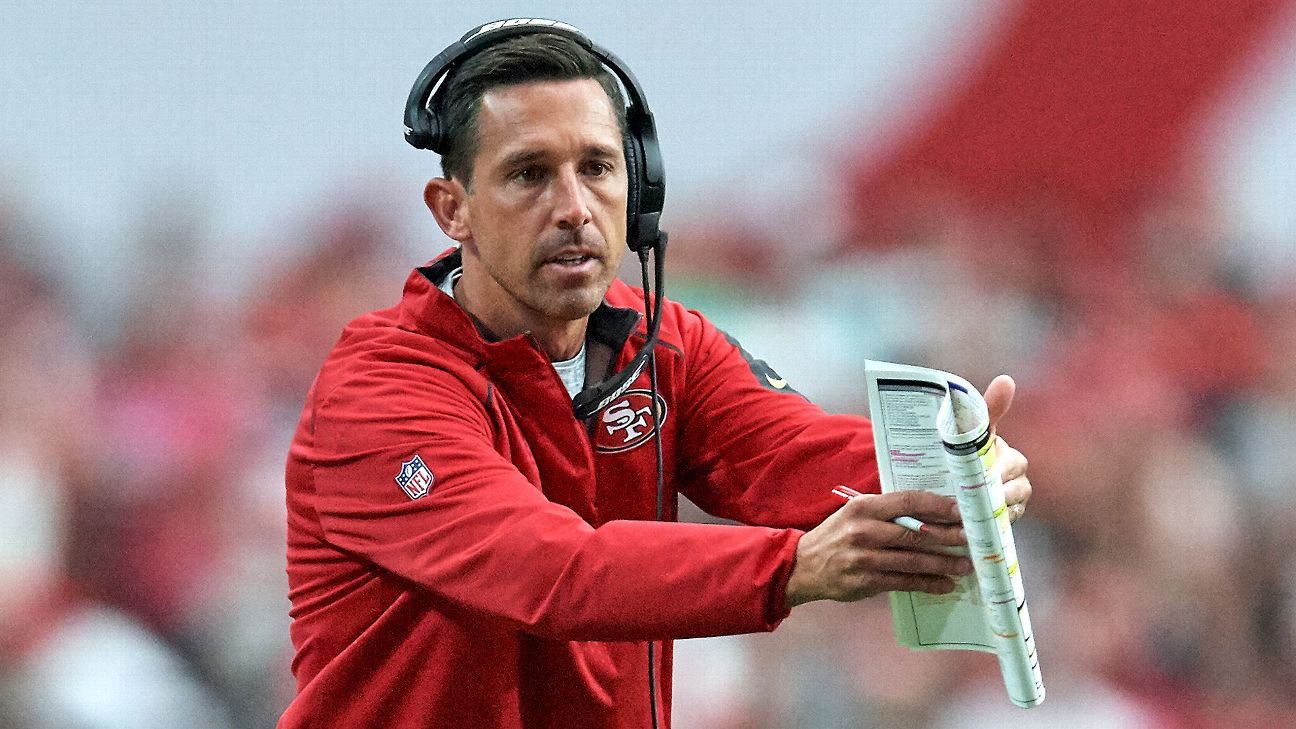 As the 49ers opened their 2018 training camp, Shanahan heard from wide receiver Pierre Garcon that Lil' Wayne and his management team had become aware of the notion that Shanahan had named his son after the rapper -- Lil' Wayne's given name is Dwayne Michael Carter Jr. -- and wanted to send some memorabilia to Shanahan and his son.

On the inscription to Carter Shanahan, Lil' Wayne signed it "To Lil' Carter."

"Mine has the cuss words; the one he gave to my son was edited," Shanahan said. "That was very thoughtful, so I can actually play it for my son. It was pretty neat. He was pumped. I showed him when I got home. He still doesn't know how cool it actually is."

Word that Carter Shanahan was named after the New Orleans-based rapper first leaked in May, courtesy of former NFL quarterback Chris Simms. Simms and Shanahan are close friends from their days together at the University of Texas, though Shanahan declined to call his friend out for leaking the news after Friday's practice.

"Someone on a podcast let that out a while ago. It was pretty messed up," Shanahan said. "He let that out and so people heard, and I think it got to [Lil' Wayne]."

Shanahan said that Lil' Wayne became a mainstay on his work music rotation when he first started as an offensive quality control coach for the Tampa Bay Buccaneers in 2004. "The Carter I," which was Lil' Wayne's fourth mainstream solo album, dropped on June 29, 2004, and became the soundtrack to hours and hours of tape study for Shanahan as he began his NFL coaching career.

"I just always had to sit in rooms and break down film and draw up plays, and it started when I was in Tampa with [Jon] Gruden," Shanahan said. "The only thing that gets you through is just sitting there and listening to music. I started out when I was doing that. ... It was 'The Carter I.'"

In the time since, Lil' Wayne has released three sequels to that album, though Shanahan clearly is itching for another one.

"He's got four of them, five if [rapper and Cash Money records executive] Birdman ever lets it out," Shanahan said, laughing.

As for the actual process of naming his son, Shanahan said he liked the idea, though out of deference to his wife, Mandy, he would never call it the entire reason that they went with Carter.

"If I told you it was 100 percent that, my wife would kill me," Shanahan said. "So, 'The Carter I' started it, and I was just always into that. And when my wife told me she liked the name Carter, it was easy for me because I was pretty obsessed at the time."

Since becoming 49ers coach in January 2017, Shanahan has never shied away from his love of rap music. At the team's fan event last offseason, he revealed his favorite Drake songs to the assembled crowd. Hip-hop and rap also are staples of the team's in-practice playlist, which is produced daily by DJ Kray, also known as Nick Kray, whose alternative title is administrative assistant to the head coach.

Suffice to say, Shanahan's musical taste and new ties to Lil' Wayne are a hit in the locker room.