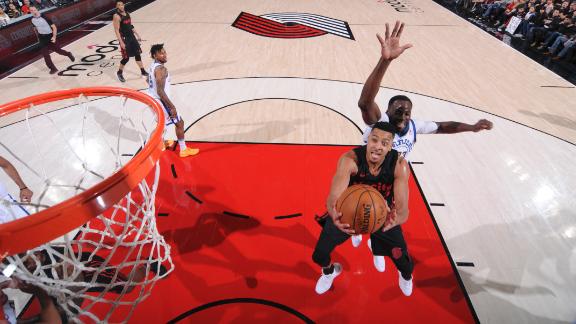 PORTLAND, Ore. -- With Stephen Curry back home in the Bay Area, the Golden State Warriors were a shell of themselves as the Portland Trail Blazers extended their winning streak to nine following a 125-108 victory on Friday at the Moda Center.

Coach Steve Kerr said no one would feel sorry for the Warriors without Curry and added they're still pretty good because they have three other All-Stars, but the Trail Blazers certainly took advantage of the floor general's absence.

Kevin Durant tried to carry his team, producing a game-high 40 points on 12-of-21 shooting, including 6-of-12 from beyond the arc and a perfect 10-of-10 from the free throw line. The Trail Blazers' defenders weren't the only ones trying to slow Durant down. In the second quarter, a fan was escorted from his courtside seat after having some words with the forward. When security took the fan away, Durant threw up the "peace" hand sign.

A fan nearby told ESPN the fan repeatedly shouted F-bombs at Durant.

"The refs heard him," Durant said. "I didn't hear him, the refs did. I don't what he said. The refs said they were about to kick him out before then anyway. He was talking s---. I mean, when you're sitting courtside, you think you're tough and you can say and do whatever, but the ref caught him."

The 6-foot-11 small forward kept the game close, as the home team held the lead for much of the contest. Portland was on top by nine at the half, but Golden State made a third-quarter push to end up taking a six-point advantage with 2:27 left in the period.

However, the lead quickly evaporated, as the Trail Blazers regained the lead with 25.6 seconds remaining in the third and then extended it to a point of no return for the Warriors in what was comparable to a game of playoff-level intensity.

"We know they take over games and dominate third quarters and they came out and made a run for it and I really liked how we weathered that storm," Lillard said. "They did what they always do, but we kept fighting."

The Warriors played undisciplined for much of the game, as they fouled multiple players in the act of shooting 3s. At certain points, Kerr would call a play from the sideline and players would act as if they couldn't remember the formation. Kerr was seen visibly frustrated by their lack of execution and attention to detail.

"Take your pick," Kerr responded when asked what bothered him throughout the game. "The fouling bothered me the most."

During the game, Draymond Green picked up his 15th technical foul on the season. He's one tech away from an automatic one-game suspension.

"All I said was that's two," Green told ESPN, in reference to two fouls the officials called against them.

Curry didn't make the trip because he is nursing a right ankle tweak that occurred in Thursday's win over the San Antonio Spurs. Quinn Cook made his third career start and scored eight points in 30 minutes.

"Obviously they're down some players," Trail Blazers coach Terry Stotts said, "but they're still a really talented team and it was a good win."

With the Toronto Raptors defeating the Houston Rockets, and in the process snapping their 17-game winning streak, the Warriors had a shot at reclaiming the top spot in the Western Conference standings had they won Friday.

Golden State heads to Minneapolis to face the Minnesota Timberwolves on Sunday to close out its two-game trip.

Blazers snap Warriors' streak
Kevin Durant goes off for 40 points, but the Blazers win their ninth straight game behind CJ McCollum's 30 points in a 125-108 win against the Warriors.

Fan ejected after words with Durant
A fan sitting courtside gets kicked out of Friday's Warriors-Blazers game after talking to Kevin Durant.