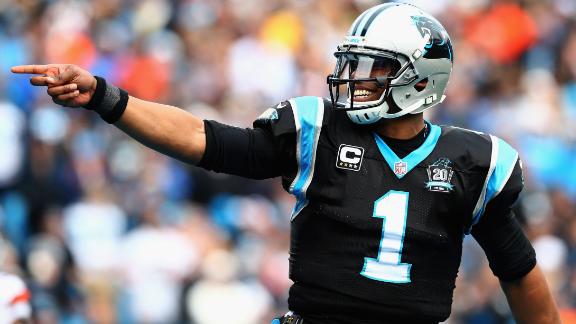 BEREA, Ohio -- With his rookie season limited to 175 passing yards and no wins as an NFL starter, Browns quarterback Johnny Manziel took ownership of his struggles but would consider it unfair if Cleveland gave up on him after a limited sample size.

The Browns have given no indication of that. But reactionary fans will naturally wonder if the Browns might do anything with those two upcoming first-round picks after Manziel led the Browns to 10 total points in 15 offensive series stretching over three games. Manziel played a full game once, in a 30-0 loss to Cincinnati, before hurting his hamstring in the first half last week in Carolina. Manziel had his left hamstring wrapped while in the locker room and will miss the season finale at Baltimore.

"I don't think it'd be fair to give up on somebody after seven quarters of football," said Manziel, who finished the year 18-of-35 passing with one touchdown and two interceptions. "If that's what they are in the business for and what they intended on me coming in here doing, just giving them seven quarters, giving them a couple of games and then looking somewhere else, I don't feel that's a lot of commitment of sticking with somebody."

Manziel, has made clear he wants to be "the guy" in Cleveland, which cues an offseason that the quarterback admits he must handle differently than last. Manziel was still in a "college mindset" last year, he said, probably not taking the rookie learning curve seriously enough, but he stops short of saying last offseason affected his preparation on the field.

"It's been a year of growing up for me," Manziel said. "It's a job for me now. I have to take it a lot more seriously than maybe I did at first."

Manziel plans to spend more time in Cleveland this offseason, though he'll get back to his native Texas and work out in California as well.

Wherever Manziel goes, the cellphone cameras will follow. Manziel might still flash money signs on the field -- "you can't suck all the fun out of the game," he said -- and admits he was caught up so much in offensive scheme and terminology that he didn't "go out and let the football rip" as a starter like he did in his first drive in Buffalo, which resulted in his only touchdown.

But perhaps he'll limit the easy offseason headlines for which the Browns must answer.

"I haven't painted the greatest picture of me being in here and staying on top of my stuff," Manziel said. "I'm sure the stuff off the field has negatively affected that. But I know, and what matters to me the most, is that guys in this locker room see that I'm working. ... This is my life and my job, and I'm 100 percent committed to that."

Manziel is resigned to his cheerleader fate this week, as former practice squad quarterback Connor Shaw could get the start Sunday. Brian Hoyer hurt his throwing shoulder last week in Carolina and tried to throw the next day but couldn't. He will try again on Friday.

"I want to play for the guys in the room," said Hoyer, who led the Browns to seven wins and hopes for an eighth.

Shaw, a former standout at South Carolina whose only pre-draft workout invite came from Cleveland, said he's "really excited" about his chance.