Michael Sam still on draft board 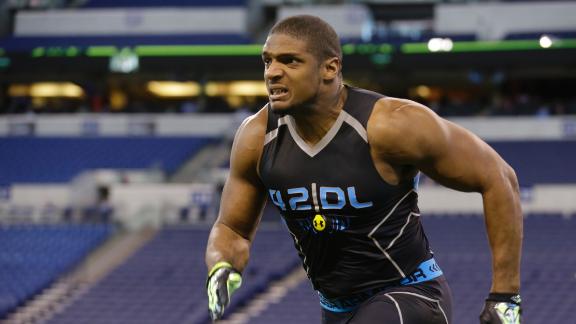 Michael Sam, poised to become the NFL's first openly gay player, is still on the board after six rounds of the NFL draft.

Sam, who announced he is gay in February, has seen his draft stock drop following a disappointing showing at the scouting combine.

As a senior at Missouri, Sam registered 11.5 sacks and 19 tackles for losses en route to being named a first-team All-American and the SEC Defensive Player of the Year. After playing defensive end in college, the 6-foot-2, 256-pound Sam is expected to transition to outside linebacker in the NFL.

Earlier this week, Sam signed his first endorsement deal, partnering with Visa. Although his marketability is likely to be tied heavily to making a team and playing well, he has received dozens of endorsement deal offers, which is unprecedented for an expected late-round pick.

Information from ESPN.com's Darren Rovell was used in this report.