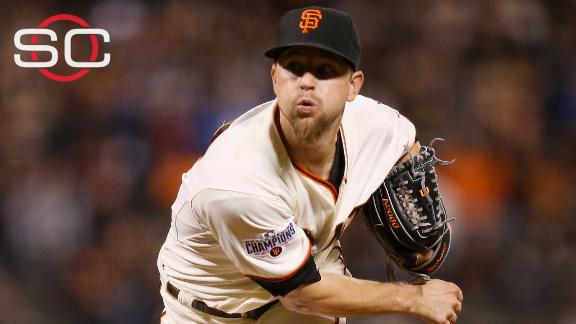 ST. LOUIS -- Minutes after his contract with the St. Louis Cardinals was announced, Mike Leake was looking ahead to rivalry games against the Chicago Cubs.

"Honestly," he said Tuesday, "I wouldn't mind taking them down."

Leake and the Cardinals agreed to a five-year contract with a mutual option for 2021, a move St. Louis hopes boosts their chances to win a fourth straight NL Central title.

The deal is worth $80 million and includes a full no-trade clause, according to multiple reports. The option year would increase the value of the deal to approximately $93 million, according to reports.

During his news conference, Leake raised a No. 8 jersey, the number he wore at Arizona State.

"When we make decisions, it is about performance," general manager John Mozeliak said. "We heard nothing but positives."

Leake described the Cardinals as a "dynasty." Before last season, St. Louis had been to the NL Championship Series or deeper four consecutive years.

"When the offseason is unfolding, different options pop up," Cardinals general manager John Mozeliak said. "When this did, we decided it made a lot of sense. I do think it makes the Cardinals stronger."

Ace Adam Wainwright, who returned late in the season from a torn left Achilles tendon, heads a rotation that includes Carlos Martinez, who was sidelined in September by a shoulder injury but is anticipated to be ready for spring training. Jaime Garcia and Michael Wacha also are expected to start, and lefties Marco Gonzales, Tyler Lyons and Tim Cooney could earn rotation spots.

Mozeliak said talks with Leake began about a week-and-a-half ago. Leake had put a priority on Arizona, where he lives, but the Diamondbacks signed Zack Greinke and acquired Shelby Miller from Atlanta.

"Honestly, once Arizona got out of the picture I was open to whatever team I felt fit my needs the best," Leake said. "[Arizona] was my No. 1. Coming here has turned into my new No. 1."