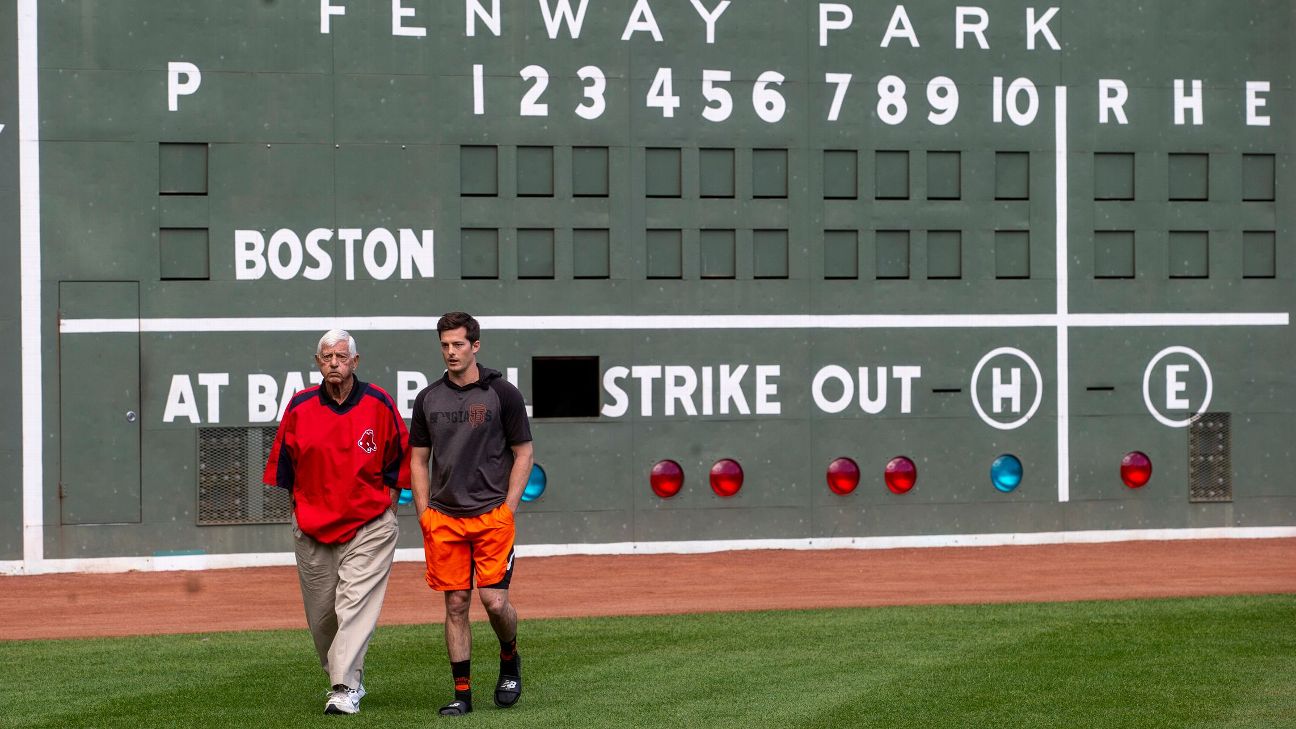 He got the crowd at Fenway Park to give a standing ovation after a home run by an opposing player.

In his first game at the ballpark his grandfather called home for 23 years, Yastrzemski homered in the top of the fourth inning of Tuesday's game against the Boston Red Sox in a moment that couldn't have been scripted better. The solo shot was the 238th home run by a Yastrzemski at Fenway Park and the first since Carl Yastrzemski went deep against Moose Haas of the Milwaukee Brewers on July 31, 1983.

"Being able to do that in front of friends and family was super special," Yastrzemski said after the game. "I'm just glad that they got to make it for it."

"I couldn't be happier for him, and the year as a whole," Giants manager Bruce Bochy said after the game. "Getting called up here and playing the type of ball he is, having a chance to come here to Boston and play left field where his grandfather did and hit a home run in the first game, it's hard to script out any better than what happened tonight for him."

It didn't take long for Mike to feel the history as he walked into Fenway Park before Tuesday's game. The memories all came rolling back. As a kid who grew up in the Boston area rooting for the home team, absent of the fact that his grandfather was a city icon, the younger Yaz thought back to all of the games he attended at Fenway growing up -- from the 1999 Home Run Derby to the World Series runs in 2004 and 2007.

He thought about all the times he'd spent with his family at Fenway Park, where the Red Sox retired his grandfather's No. 8 back in 1989.

"Playing here is cool, and I see it as part of my job and something I've always wanted to do. That doesn't really overwhelm me," the younger Yastrzemski told the media before Tuesday's game. "To do it in a setting where I have so many fond memories with friends and family and have them be able to be here, it's special."

Yastrzemski received a nice round of applause from the Fenway crowd when his name was announced. He struck out swinging in his first at-bat and drew a walk in his second at-bat, scoring San Francisco's first run of the game on aStephen Vogt double.

The Yastrzemski family doesn't usually gather in the season, but the series in Boston will be the exception. The elder Yastrzemski, who rarely appears at Fenway Park save for a first pitch before a World Series game, met with his grandson on the field before Tuesday's game, giving Mike tips on playing the Green Monster. He told the Boston Globe on Monday that he planned to do a television interview with his grandson prior to Tuesday's game but would leave afterward to watch on TV.

"We've got everything planned for Wednesday," Carl said about the family's plans for Fenway. "We thought about going in on Tuesday but decided against it. He's going to have enough people bothering him, and it might be a little easier on him if I'm not there watching him.''

In an interview with NESNon Tuesday, Carl said the best way he can describe the magnitude of this moment is to compare it to the season he was named American League MVP and led the Red Sox to a World Series appearance against the Cardinals.

"The only way I can make any type of comparison would be to compare the '67 season to this moment," he said. "To play 700 games in the minor leagues, he always said he'd make it. I think that's what I'm proud of the most, because of his sticking to it, not complaining. He's a great kid, which is more important."

Bochy, a 14-year veteran manager, decided to play into the moment, putting Mike in the leadoff spot manning the same left field as his grandfather.

"To be honest, sure, I wanted him to play left field tonight. He gets the nod there. It'll be a cool moment," Bochy said in a pregame interview. "I'm sure for a lot of people here, it'll be a great reminder of all the great things his grandfather did, bringing special memories into their minds. I look forward to it. I had a chance to meet Carl today and he came into the clubhouse and we sat and talked for a while, and so this is cool for everybody. The fans here in Boston, but us, too."

"It will be the first time since 1983 that the name 'Yastrzemski' will be announced,'' Carl, now 80, said. "It's definitely going to be emotional. To see him come into Fenway Park where I played for 23 years, to have his name announced, that will be a great thrill for me.''

The younger Yastrzemski grew up a huge Red Sox fan, citing Trot Nixon, Pedro Martinez, Nomar Garciaparra and Manny Ramirez among his favorite players. Mike admitted that it wasn't until high school, turning 15 years old, when he began to realize everything his grandfather accomplished in his hometown.

"When I turned 23, that was the big shocking moment, was that for my entire life he has showed up to Fenway Park every day," Yastrzemski said. "That blew my mind. I can't picture 23 years' worth of Major League Baseball experience. That's when that really set in."

Yastrzemski will have more than 150 family and friends attending the series, including friends from his alma mater, St. John's Prep in Danvers, Massachusetts. While Tuesday represents a dream come true, it's been a long path for Mike, who spent six years in the Baltimore Orioles' minor league system before getting his opportunity in San Francisco this year, where he's hitting .265/.324/.509 with 19 homers. His slow climb to the majors has helped him appreciate this moment a little bit more.

"Through the long path it took me to get here, I started to understand which things are important and which aren't so I could stay focused on the things that have really grown to matter and the story that needs to unfold here," Yastrzemski said. "It's special for my family and my grandfather as opposed to keeping it on me."

Before that moment came, when Mike Yastrzemski heard his name for the first time over the Fenway speakers, more than 58 years after his grandfather played his first game in Boston, he'd hoped, talking to the media before the game, to take a moment to appreciate everything it took to get to this moment.

"That's the one thing I'm unsure of how it'll affect me. Everything else I've got a good grasp on. Hearing that will probably be emotional, but that's probably the moment that I need to allow myself to enjoy and take my time and say 'this is special,'" Yastrzemski said. "This isn't just special for me. This is special for anyone who saw my grandfather play and saw the Red Sox play over history. They have some tie to him because of his historic value to the organization. While it is special for me, I need to let it be special for everybody else as well."

With a moment to breathe and reflect after Tuesday night's game, young Yaz was left short for words.

"The crowd reaction all night was incredible," Yastrzemski said. "I can't thank them enough for being supportive and just showing me some love when I'm on the opposing team. It's unheard of and it was really special." 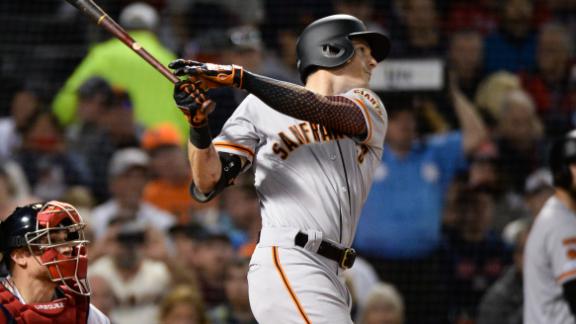 Yastrzemski gets ovation, crushes homer in Fenway
Mike Yastrzemski hits a home run reminiscent of his grandfather out deep to center field in Fenway Park to give the Giants a 5-1 lead over the Red Sox.
Report a correction or typo
Related topics:
sportsespnboston red soxmlbmike yastrzemskisan francisco giants
Copyright © 2020 ESPN Internet Ventures. All rights reserved.
More Videos
From CNN Newsource affiliates
TOP STORIES
A day in the life of a preschool in SF amid COVID-19 crisis