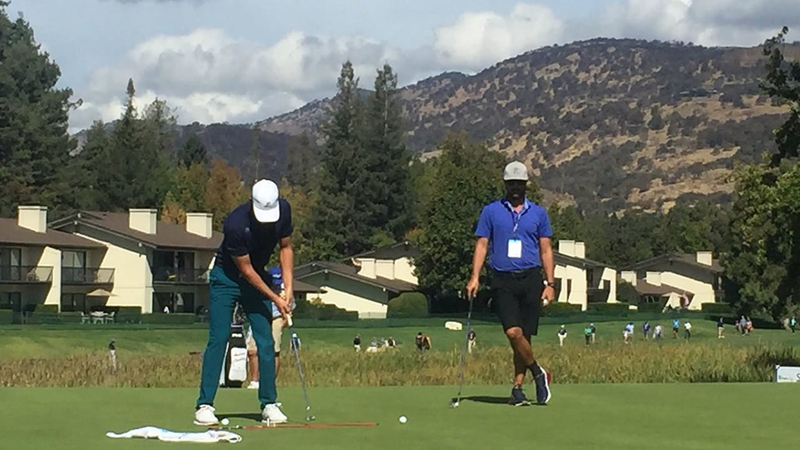 NAPA, Calif. (KGO) -- The Safeway Open golf tournament is in full swing this weekend at Silverado Country Club in Napa Valley. It was exactly one year ago that the North Bay fires forced the evacuation of some golfers and executives at the resort.

For most people, the Atlas Peak Fire is seared into their memories as they look up at the still-charred hillsides surrounding the golf course. The fire department is here but there are no lights or sirens as the memories come back.

"Last year, when this event ended, it was the scariest moment of my life," said Safeway's executive director, Jeff Sanders. He has pledged that all proceeds from ticket sales this year, combined with another $8 million, will go to fire relief efforts.

Sanders remembers the flying embers as golfers were evacuated on a Sunday night after the tournament concluded. "Those little hot pieces of wood flying through the air at 70 miles per hour. When they landed, they started fires. It wasn't flames, it was those embers. They hit and boom, fire. We lost two Safeway semi-trucks you see going down the freeway with groceries in them, we lost three Lexus courtesy cars. We lost our suites behind number 17, because that plastic you have for the suites, as soon as it got near, it went boom," he said.

"It was such a sad tragedy last year but to see the way the community has bounced back in support of this tournament and this community, it's pretty cool," said PGA golfer Phil Mickelson.

This year, the only fires are in the fire pits. The golfers are laser-focused on their game, but even they couldn't help noticing still barren, burned out hillsides above the cool, manicured greens.

"It's kind of sad, very sad. You get around on the backside of the course number five and six and there are five or six houses I remember being there. But now they're just the pools there. It's really sad to see," said Chesson Hadley.

"We had massive rain two years ago. We had the fires last year and I'm hoping this year, we can get through this tournament and walk away saying this was a great year," said Silverado Country Club's Jim Andrews.

Bright blue skies, charred hillsides but no lights or sirens this year. For nearly everyone, memories of the Atlas Fire are forever seared in their minds.

For more stories and videos related to the North Bay fires, visit this page.

A year ago hills were on fire. Now golfers back for Safeway Open talking memories. Silverado Napa #abc7news pic.twitter.com/Gf1dfFsEb9