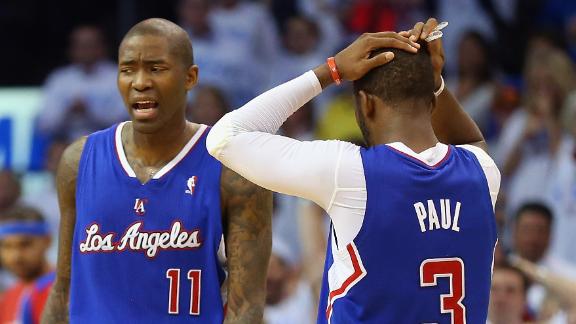 Rivers said the Clippers were "robbed" of a victory after a call went in favor of the Thunder with 11.3 seconds left on what he called a "series-defining play."

On Wednesday, the league defended the call, even though it appeared on replay that the ball went out of bounds off Oklahoma City guard Reggie Jackson while he was defended by Clippers forward Matt Barnes. The Thunder were awarded possession after a video review.

Rivers has often told his players not to worry about the officials because he will speak on their behalf during games, and Tuesday was the first time he felt the need to do it after a game, resulting in his fine.

"He has our back to the utmost," Barnes said. "Just because he might not always say it in the media, we know he has our back and he's done a tremendous job of allowing us just to focus on basketball."

On the flight back to Los Angeles after Tuesday's loss, Rivers held a team meeting in which he told the Clippers if they wanted to win a championship, they would have to face adversity and that the call was just another obstacle for them.

"He said what he believes and we always have Coach's back," Jamal Crawford said. "He always has our back and we always have his back. He's had our back the whole way through. He really felt strongly about this situation and we backed him for sure, but it is what it is and now we have to move forward."

Rivers did not address reporters after Thursday's shootaround but said Wednesday that he had gotten past the call and the loss.

"I was very upset last night, and rightly so, but you got to move on," Rivers said. "That's basically what I told our guys last night."