Major League Baseball created an Anti-Hazing and Anti-Bullying Policy that covers the practice. As part of the sport's new labor deal, set to be ratified by both sides Tuesday, the players' association agreed to not contest it.

The policy, obtained by The Associated Press, prohibits teams from "requiring, coercing or encouraging" players to engage in activities that include "dressing up as women or wearing costumes that may be offensive to individuals based on their race, sex, nationality, age, sexual orientation, gender identity or other characteristic."

MLB vice president Paul Mifsud said Monday that the new rules resulted partly "in light of social media, which in our view sort of unfortunately publicized a lot of the dressing up of the players ... those kind of things which in our view were insensitive and potentially offensive to a number of groups."

"There's lots of pictures of baseball players dressed up as Disney princesses," he said.

Or even more outlandish things, often for late-season plane trips:Bryce Harper as a member of the U.S. Olympic women's gymnastics team,Mike Trout as Lady Gaga,Manny Machado in a ballet tutu andCarlos Correa as Wonder Woman. Those are all out starting next season.

"Although it hasn't happened, you could sort of see how like someone might even dress up in blackface and say, 'Oh no, we were just dressing up,'" Mifsud said. "We've also understood that a number of players have complained about it."

Exactly when the annual dress-up day began around the majors isn't clear. Players often consider it a form of bonding, and it has become more and more of a production in recent years.

"Times have changed. There is certain conduct that we have to be conscious of," MLB Players Association general counsel Dave Prouty said. "The important thing for us was to recognize there was a policy but to preserve the players' rights to challenge the level of discipline and the imposition of discipline."

Not all outfits are banned; superheroes such as Batman and Spider-Man are OK. Other past costumes that would be allowed include San Francisco ace Madison Bumgarner as a giant ketchup bottle, Miami slugger Giancarlo Stanton on the U.S. Olympic men's water polo team andLos Angeles Dodgersoutfielder Yasiel Puig as Gumby.

The issue of locker room bullying erupted a few years ago, when an NFL investigation found thatRichie Incognito and two other Miami Dolphins engaged in persistent harassment toward teammate Jonathan Martin.

MLB looked at several college anti-hazing policies while developing these new rules, and they are already being criticized by some current and former players.

"Seriously?!" former Red Sox star Kevin Youkilis wrote on Twitter. "Had to wear a Hooters outfit going through customs in Toronto and wore it proudly [because] I was in the Show."

Dodgers pitcher Ross Stripling tweeted a photo of himself and teammates sporting cheerleading uniforms and said he was "honored to be one of the last players ever to be dressed up as a woman."

Last September, the New York Mets posted photos and video of players going to Starbucks in Philadelphia wearing uniforms from the All-American Girls Professional Baseball League, as portrayed in the 1992 movie "A League of Their Own." Several other teams engaged in similar behavior.

In 2007, theYankees' theme was "The Wizard of Oz." Ian Kennedy wore Dorothy's ruby red slippers for a flight from New York to Tampa, Florida.

"I'd rather be here dressing up than anywhere else," Kennedy said at the time. "It makes you feel like one of the guys."

The new policy states "a player's actual or perceived willingness to participate in prohibited conduct does not excuse the activity from being considered a violation of the policy."

Not everyone saw these things as fun. After he was traded to the Mets in 1992, Jeff Kent threw his pimp costume to the floor in the visitors clubhouse in Montreal and demanded that his regular clothes -- which contained the ID he needed to go through customs -- be returned.

"I paid my rookie dues in Toronto," he said then. "I feel I have endured my embarrassments, my punishment. I felt I was being taken advantage of. They wanted to go overboard. I stuck up for myself. I won't be pushed around."

Some common rookie rituals are permitted. Last year, the St. Louis Cardinalsand Dodgers made their newcomers walk across the street from Wrigley Field -- in their full uniforms -- to bring back coffee before their games against theChicago Cubs.

Rookie relievers still might find themselves lugging snacks across the diamond to the bullpen for the veterans. But requiring players "to consume alcoholic beverages or any other kind of drug, or requiring the ingestion of an undesirable or unwanted substance (food, drink, concoction)" is banned under the new collective bargaining agreement.

The policy is in addition to the workplace code of conduct adopted by MLB and the union in 2013, after the office of New York Attorney General Eric Schneiderman asked to meet with baseball officials and inquired what rules the sport had in place against bullying with respect to sexual orientation.

"The purpose of this policy is not to prohibit all traditions regarding rookies or players," the new policy states, "but rather to prohibit conduct that may cause players physical anguish or harm, may be offensive to some players, club staff or fans, or are distracting to the operation of the club or MLB." 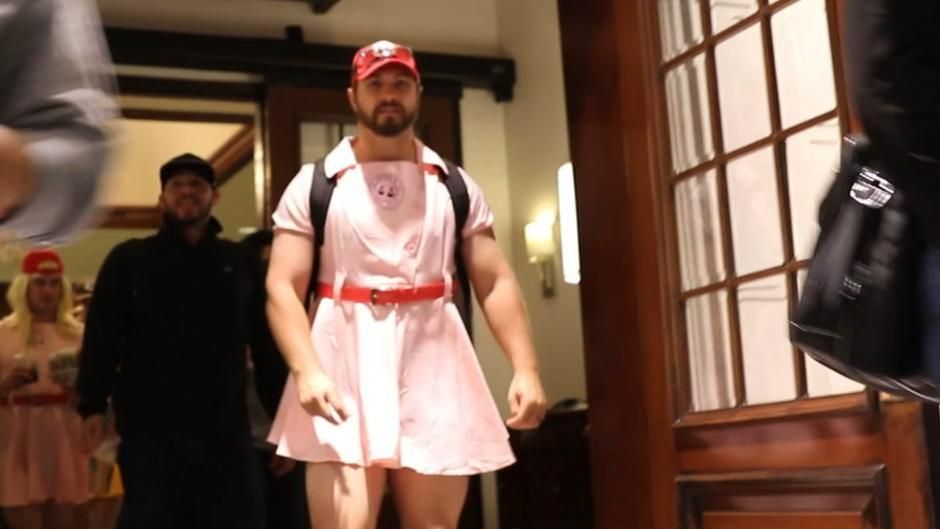