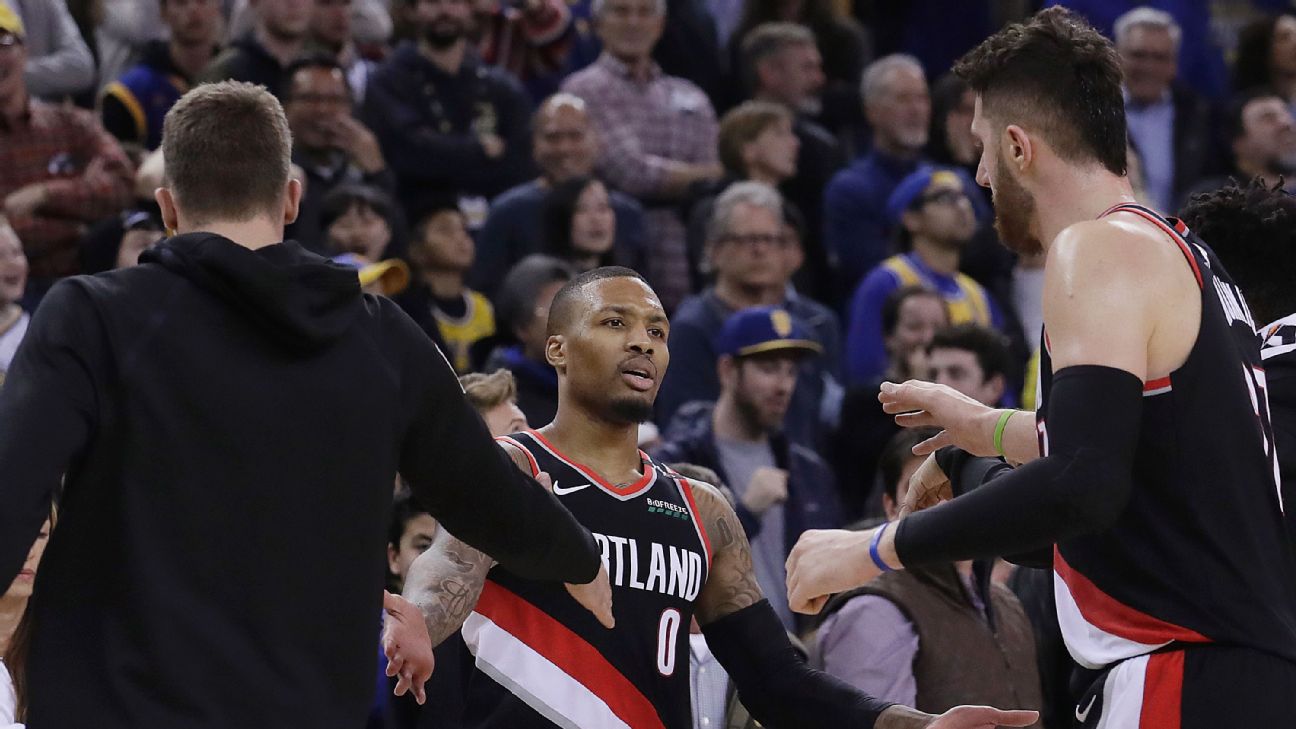 OAKLAND, Calif. -- Terry Stotts emerged from the visitor's locker room at Oracle Arena with a smile while sipping on champagne.

Stotts and the coaching staff of the Portland Trail Blazers celebrated passing Rick Adelman for second on the Blazers' all-time coaching wins list, and they had Damian Lillard to toast the occasion to for drilling what will be one of the All-Star point guard's most memorable game-winners.

In his final regular-season appearance in his hometown of Oakland, Lillard buried a difficult 26-footer over Stephen Curry before falling down with 6.3 seconds left in overtime to hand the Golden State Warriors their second consecutive home loss, 110-109 in overtime.

Lillard made up for nearly losing the ball and throwing up a desperation 29-foot heave that missed badly with 1.4 seconds remaining -- thanks to Klay Thompson's defense -- that could have won the game in regulation.

He didn't waste another chance to win the game. The Oakland product finished his final regular-season appearance at Oracle Arena in memorable fashion. The Warriors will move into their new home in San Francisco next season.

"I mean, that's a helluva way to go out," Lillard said. "We needed this win. It's a big game for us, especially having to play them two times in a row [with a game at Portland on Saturday]."
"I almost gave it up, it was huge for us," Lillard added. "... That was a great win, great way to go out here."

After getting drilled 127-101 at home on Christmas by the Los Angeles Lakers despite LeBron James leaving the game in the third quarter with a groin injury, the Warriors played sloppy basketball for much of this game and fell behind by 96-86 with 3:13 remaining.

Thompson (15 points, 2-for-9 3-point shooting) still remains in a shooting funk. But Curry and Kevin Durant led a 16-6 run in the last 3:13 of regulation, capped with a Durant 3-pointer from Curry that tied the game with 20.1 seconds left in the fourth quarter.

Draymond Green started to show signs of offensive life with 15 points, 11 rebounds and seven assists and hit a 3-pointer with 51.8 seconds left in overtime that put the Warriors up 109-107.

But just as the Warriors looked like they were about to start rediscovering some of their mojo up two with the ball in the last 15 seconds, Curry was trapped and had a pass deflected high for a turnover near midcourt. The Trail Blazers threw the ball up to Lillard, who nearly gave the ball away. But Al-Farouq Aminu chased down the loose ball and hit Lillard near the right corner for the latest Dame dagger over Curry.

"Damian Lillard is a Hall of Famer," said Durant, whose 13-foot jumper was short at the end. "So if he gets a look down two on the road, you know he pulling."

Curry (29 points, seven assists) repeatedly took the blame for the loss for the last of his seven turnovers.

"Obviously, I wish I would have taken care of our possession on my end and not let [Lillard] get that opportunity," Curry said. "So obviously that's on me."

"It's not all the way there, but we are very open about what it's going to take to get there," Curry added when asked about where Golden State's championship energy and spirit currently is at. "... We are together. The message tonight was fight your way through it. Whatever is going on, whatever you need to do to get your mind right, get your joy back in what we do, get there. Second half was better. Win or lose, it matters. But how we're playing and continuing to build those habits will get us through it."

In the other locker room, the Portland coaches were sipping on champagne thanks to Lillard, who used to come to this building as a fan, dreaming of hitting shots like the one he did on Thursday.

They actually just turned the camera on and I said why not show the Oakland tat https://t.co/z1029AHeae

"I grew up coming here," Lillard said. "It's a pleasure to be able to be a fan growing up and then to be able to, [during] my first seven years of my career, come and play here in front of my family and friends."

"It's unfortunate that they are moving on, but it happens. I was glad I was able to do both."

Durant drills game-tying 3
Steph Curry can't connect on his 3-ball, but the Warriors get the rebound and Kevin Durant drains the game-tying triple to force overtime.

Curry's inbounds pass swishes in
With under a second left in the fourth quarter, Steph Curry floats an inbounds pass to the hoop that goes in, but results in a violation.