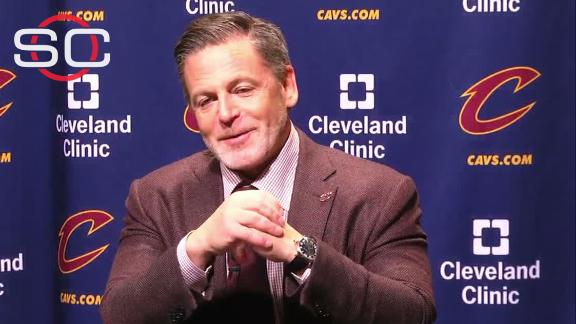 CLEVELAND -- Cavaliers owner Dan Gilbert said he's spending a near-record amount on salaries and luxury taxes because it would be foolish not to.

Since the end of last season, the Cavs have locked up players to nearly $300 million in new contracts, including $113 million to Kevin Love, $82 million to Tristan Thompson and $47 million to LeBron James. Currently, Gilbert is committed to spending $175.6 million on payroll this season, with $65 million of that in luxury taxes. Those numbers would represent the second-highest spending numbers in league history, falling behind only the 2013-14Brooklyn Nets, who spent $197 million, including tax.

"We're committed; we're all-in ... When you invest in something like a sports franchise and you're in for so much ... if you at the margins start pulling back, I think that may be foolish on a lot of fronts," Gilbert said before the Cavs beat theMiami Heat102-92. "We're investing for the future as well as the current."

With the exception of James, who can be a free agent next summer, the Cavs now have their entire core locked up for the next four seasons, as Kyrie Irving is at the start of a new extension he signed last year. Gilbert said that was a driving force behind all the spending in the offseason.

"These guys who are under these large contracts, that's a core for four or five years," Gilbert said. "That's an eternity in this league. As we've seen with NBA franchises, that formula can work."

When the team finished its business last week by striking a deal with Thompson after a long stalemate, James praised Gilbert's willingness to spend.

"When you have an ownership group that believes what it's going to take, then money is not an object," James said. "It's a sign that [Gilbert] will do anything to help us go out there and perform."

"We look at this year by year. There's so many factors, so many things can change," Gilbert said. "We always like to have options. It's not so much the amount of payroll. The question is if you can maneuver. If the team goes a certain way, are all the contracts valuable? Can your general manager still play chess? We never try to say this is [the budget]. It really is how it operates."