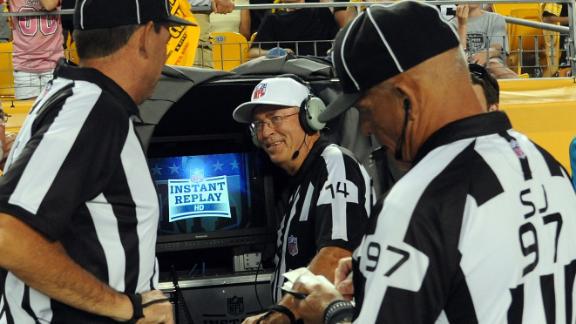 Significant changes to the use of video replay, including reviewing all fouls called by game officials, and a rule change that would allow teams to try for a "bonus" point after a successful 2-point conversion are among proposals that will be presented by the NFL's competition committee at next week's owners meetings in Phoenix.

The committee Wednesday outlined 23 proposed changes to rules and procedures, which will be discussed and voted on at next week's meetings. Nineteen of the proposed rules changes were submitted by teams, with the other four proposed by the competition committee.

In addition to these proposals, the owners are expected to discuss expanded playoffs and the "catch-or-no-catch" rule, though specifics on those rules will not be publicly released until the owners receive them Monday. Owners will also consider four bylaws changes and one resolution at the meetings.

The committee is presenting a proposal by the Detroit Lions that would permit the instant replay system to correct an officiating error. That would include such controversial calls as pass interference.

"Yeah, I think there will be changes in the next few years on that," Lions general manager Martin Mayhew said. "There were a number of proposals, 12 different proposals on how to sort of revamp it or make it more efficient, and I think there will be some changes that happen eventually. We're going to be open to those things. Whatever gets proposed, we're going to be open to supporting something we can all agree on. Clearly, something needs to be changed, you know, or there wouldn't be that many suggestions on how to change it. From my standpoint, we're open to other ideas."

St. Louis Rams coach Jeff Fisher, a member of the committee, made it clear his peers wouldn't favor such a change.

"It would be our responsibility on the field, whether these are fouls or not fouls,'' Fisher said of his fellow coaches. "This [replay review] was never designed to involve fouls.''

The Indianapolis Colts proposeda scenario that gives teams that successfully convert two-point conversions the chance to immediately add another point with a "bonus field goal.''

Under the Colts' proposal, if a team converts a two-point conversion, it would then line up from the 32-yard line to attempt a 50-yard field goal. If the kick is good, the team would receive a total of nine points on that possession -- six for the touchdown, two for the conversion and a point for the extra field goal.

"We're just encouraging dialogue to make the extra point more relevant," said Colts GM Ryan Grigson, who is not optimistic that the proposal will pass.

The New England Patriots proposed everything except scoring plays or turnovers can be challenged. Washington suggested increasing a coach's challenges from two to three, regardless of whether he is successful on an early challenge.

Also to be discussed in Phoenix is a proposal by the Patriots to place fixed cameras on all boundary lines. That would guarantee coverage of the goal lines, end lines and sidelines, regardless of where network cameras are positioned.

Other proposals include moving the extra point attempt to the 15-yard line and guaranteeing both teams a possession in overtime, even if one scores a touchdown on its first drive.

The committee looked into the advantages and disadvantages last year and, according to Atlanta Falcons president Rich McKay, "from a competitive standpoint, we don't think there is a competitive negative to [expanding] the playoffs.''

No proposals on the handling of footballs before games were made, while the league awaits the Wells report on the Patriots' use of deflated footballs in the AFC Championship Game.

New England's use of eligible players in ineligible positions during a playoff win over Baltimore prompted a proposal that such players must line up inside the tackle box, thereby eliminating confusion for defenses.

Also, because teams are running out of permitted numbers for linebackers, the committee proposed allowing numbers 40-49 to be used for the position, along with 50-59 and 90-99.

The complete list of proposals to be discussed next week:

ESPN.com's Mike Rothstein and Mike Wells and The Associated Press contributed to this report.