ESPN
SECAUCUS, N.J. -- The Houston Astros had the No. 1 pick again, and this time, they took a pitcher polished beyond his years.

The Miami Marlins made it the first time high school pitchers were the top two picks in the draft when they selected Tyler Kolek, a hard-throwing right-hander Shepherd High School in Texas.

Aiken is "the most advanced high school pitcher I've ever seen in my entire career," Astros general manager Jeff Luhnow said. "He has command like I've never seen before of his stuff."

The Astros are the first team to select first in three consecutive drafts, having picked shortstop Carlos Correa in 2012 and right-hander Mark Appel last year.

"I'm just ready to move forward and see what the Astros have in store for me in the future," Aiken said in an interview on MLB Network. "I'm just really excited."

Aiken is also the first high school lefty to be drafted in the first five picks since Adam Loewen went fourth overall to Baltimore in 2002. The UCLA recruit has terrific control of a fastball that hits 96-97 mph, a knee-buckling curve and a tough changeup that sits in the low- to mid-80s. His draft stock rose late last year when he struck out 10 in a gold medal-winning performance against Japan in the 18-and-under World Cup.

The 6-foot-5, 230-pound Kolek has a fastball that sits in the high-90s and touched 100-102 mph several times, causing many to compare him to some fellow Texas flamethrowers such as Nolan Ryan, Kerry Wood and Josh Beckett.

"How do you pass up a guy throwing 100?" Marlins manager Mike Redmond said after Miami's 11-6 win at Tampa Bay. "So, I'm happy with the pick. It's a big, old country strong right-hander."

The Chicago White Sox selected North Carolina State left-hander Carlos Rodon with the third overall pick. The 6-3, 235-pound junior was widely regarded as the top college pitcher available in the draft and had been in the mix to go No. 1 overall.

Indiana left-handed slugging catcher Kyle Schwarber went No. 4 overall to the Chicago Cubs as the first position player selected. The Hoosiers star is a finalist for the Johnny Bench Award as the best catcher in Division I, although he could move to third base or the outfield in the pros.

"He certainly has the mentality and make up to do it," Cubs senior vice president of scouting and player development Jason McLeod said of Schwarber sticking at catcher. "He's got the will to do it. We'll let that play out. We feel he's a really good, underrated athlete that could certainly move to an outfield position. His bat is obviously why we drafted him."

Nick Gordon, the son of former big leaguer Tom Gordon and brother of the Dodgers' Dee Gordon, went fifth overall to Minnesota. The Florida high school shortstop was the first of the seven prospects in attendance at the draft site at MLB Network Studio to have his name called by Commissioner Bud Selig.

After a few interviews, Gordon breathed a big sigh of relief and gave his father a huge hug.

"This is a proud moment. It's hard to describe," Tom Gordon said. "I have nothing but pride and pure joy for my boys."

The 6-2, 170-pound Gordon, from Orlando's Olympia High School, is an outstanding defensive player who has also been impressive as pitcher with a fastball in low- to mid-90s, but his pro future is as a five-tool shortstop.

He also has some family bragging rights now: His father was a sixth-rounder by Kansas City in 1986, while his brother was a fourth-rounder by Los Angeles in 2008.

East Carolina right-hander Jeff Hoffman, who missed most of the season after undergoing Tommy John surgery, was the ninth pick by Toronto. The New York Mets rounded out the top 10 picks by selecting Oregon State outfielder Michael Conforto, a two-time Pac-12 player of the year and a finalist for the Golden Spikes award.

The draft, which is held over three days and 40 rounds, started with the first two rounds Thursday. 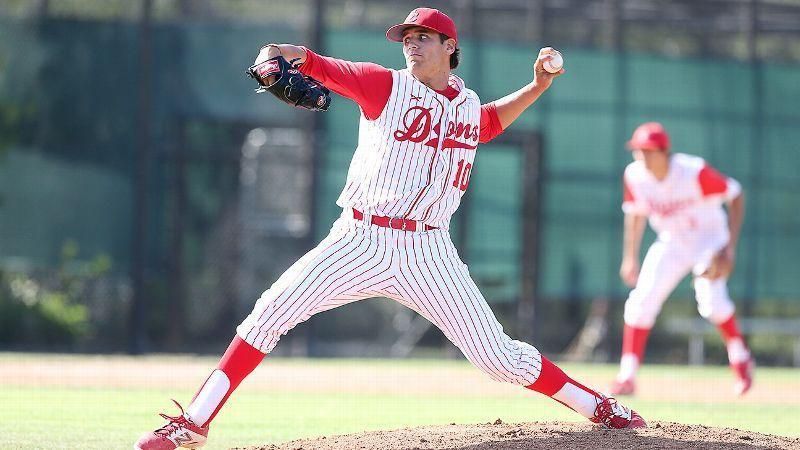 Astros Draft Brady Aiken No. 1
The Astros selected pitcher Brady Aiken with the No. 1 overall pick in the 2014 MLB first-year player draft.