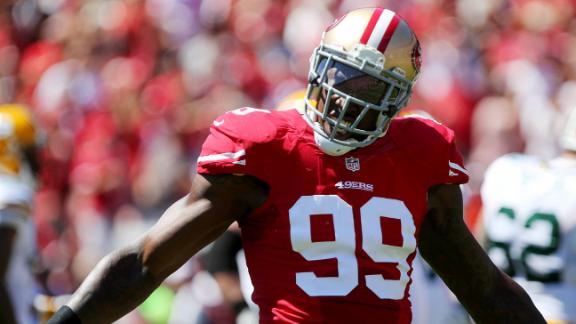 SAN JOSE, Calif. -- San Francisco 49ers linebacker Aldon Smith was sentenced Friday to serve three years of probation and to spend 11 days with a work crew after he pleaded no contest to drunken driving and weapons charges.

The judge noted that Smith has no criminal record involving violence, but warned the 24-year-old football star that if he violates any of terms of his probation, he will be sent to jail for 11 days.

Smith was also told to serve 235 hours of community service and pay nearly $4,000 in fines.

"In the end, we treated Aldon like any other person in similar circumstances," Santa Clara County District Attorney Brian Buckelew said. "We're optimistic that the punishment will be sufficient to get him on the right track."

The weapons charges stem from an out-of-control party at Smith's house in 2012, where he got stabbed and two people were shot. Investigators later found three rifles in Smith's house that were legally bought in Arizona, but are illegal in California.

The DUI charges were filed after Smith's car smashed into a tree in San Jose last fall. Police said his blood-alcohol level was twice the legal limit.

The 49ers said they continue to support Smith's efforts to grow personally from his run-ins with the law.

"We are pleased that Aldon has moved past this phase of the process, and will support any action the NFL may take with respect to this matter," a team statement said.

Smith could face a suspension from the NFL for his off-field troubles, which included an arrest at the Los Angeles International Airport in April. Authorities said he became belligerent during a random security screening and threatened that he had a bomb, but prosecutors declined to charge him.