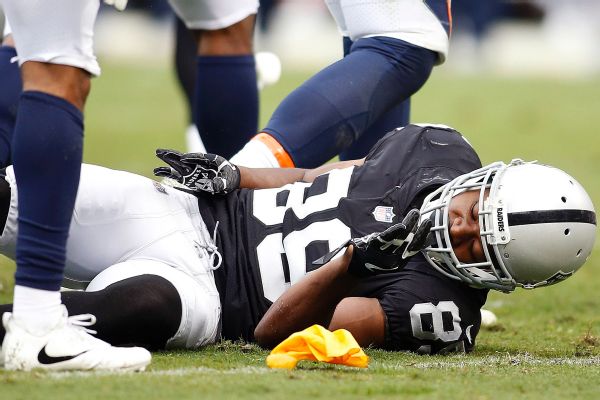 ESPN
By Paul Gutierrez
ALAMEDA, Calif. - Oakland Raiders receiver Amari Cooper, who had not practiced since suffering a sprained left ankle and concussion on Nov. 26, was listed as questionable to play Sunday at the Kansas City Chiefs after practicing in a limited fashion on Friday.

Team sources told ESPN's Dan Graziano that the Raiders coaching staff held their pre-practice meetings Friday morning under the impression that Cooper was not going to practice and would miss Sunday's game. Cooper went to the trainers and said he'd like to try to practice, and they agreed to see how he did. He participated in practice and "looked pretty good," according to one of the sources.

Asked if Cooper might be a gametime decision, Del Rio did not want to tip his hand for Chiefs coach Andy Reid.

"We'll see," Del Rio said. "I have some thoughts on it, but I don't need to share them with Andy right now."

Cooper, who has 42 catches for 499 yards and five touchdowns, was injured on a hit by Denver Broncos safety Darian Stewart, which he was flagged for unnecessary roughness.

In the Raiders' 31-30 defeat of the Chiefs in Oakland on Oct. 19, Cooper had 11 receptions for a career-high 210 yards and two TDs. He declined to speak to reporters in the Raiders locker room after practice on Friday.
Report a correction or typo
Related topics:
sportsespndarian stewartnfldenver broncoskansas city chiefsoakland raidersconcussionamari cooperankle
Copyright © 2020 ESPN Internet Ventures. All rights reserved.
More Videos
From CNN Newsource affiliates
TOP STORIES
Rome Officer Killing: Parents of SF suspect give exclusive 1st interview