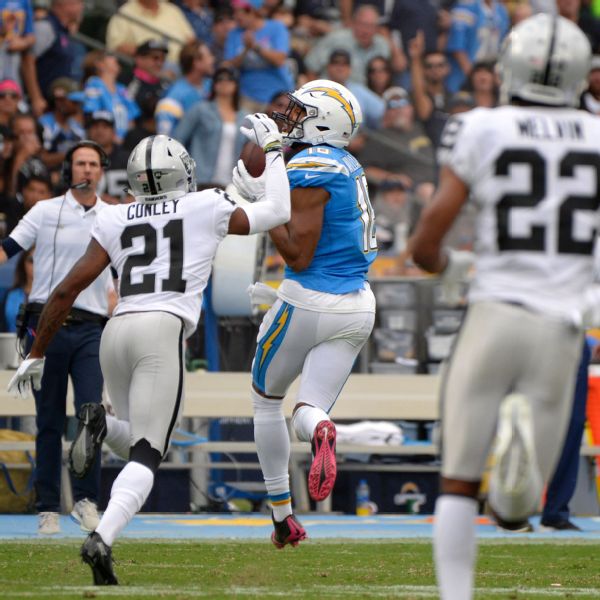 ESPN
By Paul Gutierrez
ALAMEDA, Calif. -- Much was expected out of cornerback Gareon Conley by Jon Gruden and the Oakland Raiders this season, a year after a shin injury limited the 2017 first-round draft pick from Ohio State to two games.

And while Conley has been relatively healthy -- he came back earlier than expected from a strained hip suffered in the first practice of training camp -- and has been a mainstay on defense this season, his snap total dropped off dramatically last weekend. And with Daryl Worley returning from an NFL-mandated four-game suspension last week, Conley is in jeopardy of losing his starting gig at right cornerback.

Besides, defensive coordinator Paul Guenther said Tuesday that Conley is "basically a rookie player" and a "work in progress" for a defense still trying to find its identity heading into this weekend's game in London against the Seattle Seahawks.

"He is learning a lot of things," Guenther said of Conley. "Unfortunately, he gives up the one play off the goal line and we are in a pretty good call to stop it."

Late in the third quarter of Sunday's 26-10 loss at the Los Angeles Chargers, one snap after Derek Carr's end zone interception, the Raiders had the hosts on their own 4-yard line. But Chargers receiver Tyrell Williams blew by Conley down the left sideline and Philip Rivers hit him in stride for a 48-yard gain.

"I don't want to give (Conley) too much right now," Guenther added. "If we can give him little by little by little, just like a normal rookie player, that's how I'm viewing Gareon. He really only played one-and-a-half games last year and he sat out pretty much through the offseason. It's no different than a young player. He's a work in progress."

"Worley played good," Gruden said Monday, when asked if Conley's lack of playing time was related more to his struggles or to Worley playing well.

Conley, Melvin and free safety Reggie Nelson each have an interception this year, but Conley has a 36-yard pick-sixagainst the Browns' Baker Mayfield.

Worley allowed four catches in five targets for 17 yards while making four total stops against the Chargers, which constitutes a "loss" for the offense, per PFF.

"Worley came in and played really good for his first game," Guenther said. "That added an extra guy to the mix so it's a battle at corner right now ... everybody is competing for jobs and we are going to go with the hot hand.

"I want to eventually get to two starting corners and we are settled there. Obviously, Daryl came back. He was one of our best corners all offseason and he proved it again on Sunday that he is a high-level player. We will just see how it goes; really based upon what the snaps are, the situation, on how guys are playing."
Report a correction or typo
Related topics:
sportsespngareon conleynflpaul guentherrashaan melvinleon hallcornerbackoakland raidersjon grudendaryl worleyreggie nelsondominique rodgers cromartie
Copyright © 2020 ESPN Internet Ventures. All rights reserved.
More Videos
From CNN Newsource affiliates
TOP STORIES