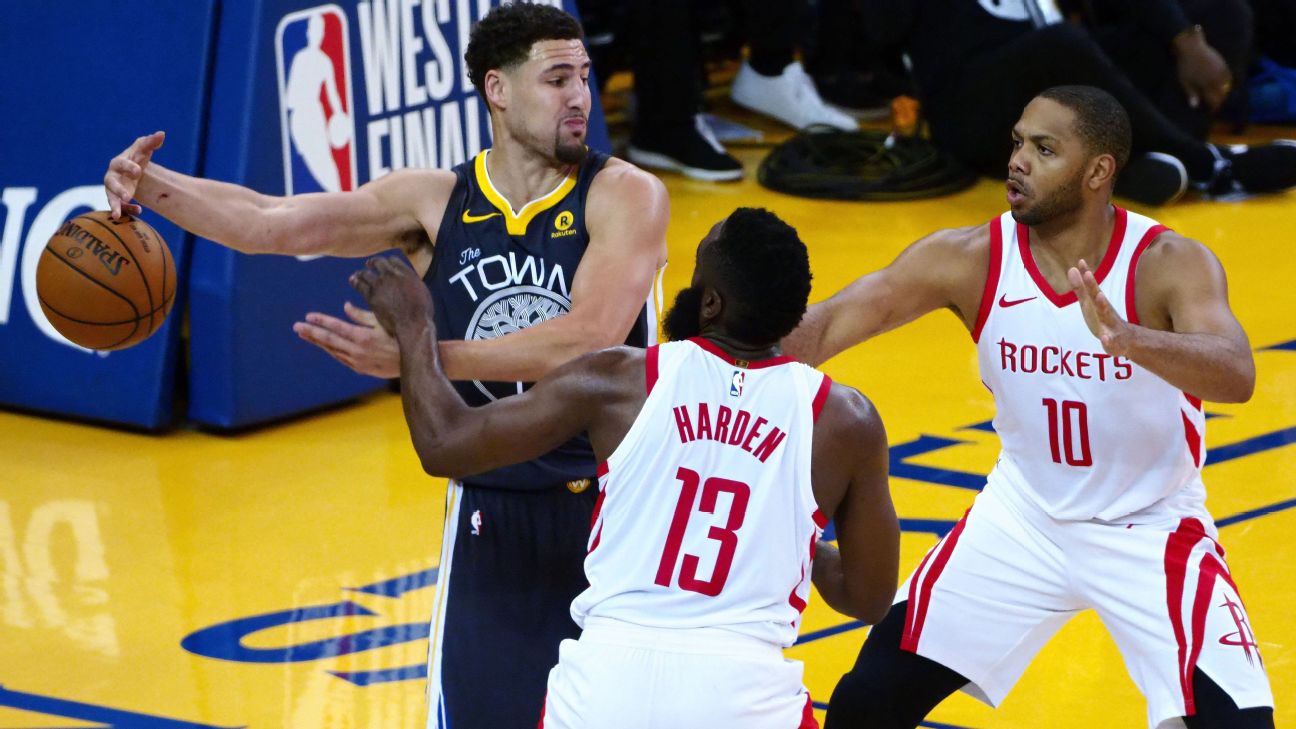 OAKLAND, Calif. -- It's all such a blur, the man who assembled these Houston Rockets couldn't remember exactly what sent him out of Oracle Arena on Tuesday night for some air.

Fifteen minutes had passed since the Rockets had rallied from a 10-point fourth-quarter deficit to beat the defending champion Golden State Warriors95-92 to even the Western Conference finals at 2-2. Morey's face looked pale. His cheeks were flush. Thoughts and words were hard to string together after such an intense game.

"I ended up walking outside. I couldn't take it," Morey said. His wife, Ellen, stayed inside to watch the end of the game and text him with updates.

Morey is always a wreck during games, but this was another level. This 65-win team might be the best he has ever assembled, and a loss Tuesday could've been catastrophic.

Instead, Chris Paul, the point guard who'd come to Houston with the hopes of vanquishing his playoff demons, rallied his team in the fourth quarter to save the Rockets' season. He scored eight of his 27 points in the fourth quarter, shrugging off a painful right foot injury that has hampered his mobility all series.

"He gave us everything you can have against these guys," Morey said of Paul, who opted to forgo free agency and a new multiyear contract to play out the final year of the deal alongside James Harden in Houston. "Man, he was so good."

Harden and Paul teamed up to form a historically good offense this season, but won this game with an epic fourth-quarter defensive stand. The Rockets held the Warriors to only three field goals and 12 points in the final frame.

Golden State led 80-70 after a 34-point third quarter. Stephen Curry had another 17-point explosion and it seemed as if the Warriors were about to coast to a commanding 3-1 series lead. The defending champions had won an NBA record 16 straight playoff games at home. They had won 39 of the 40 games this season in which they led by 10 or more points entering the fourth quarter.

The one game lost? Opening night, when the Rockets rallied from a 13-point deficit, a notice that they were a team to be reckoned with.

Houston didn't just add Paul in the offseason, it added stout defensive players like PJ Tucker and Luc Mbah a Moute. This science experiment of putting two future Hall of Fame point guards together in the same backcourt wasn't just about offensive potency, it was about building a defense that could match the Warriors' four All-Stars by switching everything and negating Golden State's deadly pick-and-roll game.

"That was the last piece for us to get over the hump and becoming one of the best teams in the league. How we defend, how we pay attention to detail and how we go about playing defense," Rockets swingman Trevor Ariza said. "Tonight in the fourth quarter when it mattered, we got stops. It let us get back in the game, it let us take the lead and it let us win."

Ariza, the only player in Houston's locker room with a championship ring (with the 2008-09 Los Angeles Lakers), has asked to guard Kevin Durant this series. That's kind of like trying to put the cap back on a soda bottle once it has been shaken up. Durant is going to score no matter who is on him. But what Ariza and the Rockets were able to do Tuesday was limit the damage he inflicted by forcing the former MVP into isolation plays and contesting his shots. Durant had 27 points on just 9-for-24 shooting, and needed eight free throws to get that many.

In the decisive fourth quarter, Durant hit just one of his five shots and passed up a shot to feed Klay Thompson in the corner on a key possession with the Warriors down by two in the game's final seconds. Thompson ended up missing a 16-foot fadeaway with 0.5 seconds left after a chaotic sequence in which Draymond Green tried to call a timeout but failed to get the referee's attention.

Who else but Paul got the rebound? After a Shaun Livingston foul and Paul going 1-of-2 from the line, the Warriors got one final look. Curry missed a 3-pointer from the left corner, which wouldn't have counted anyway because the shot wasn't released before the final buzzer. The two-time MVP was just 1-for-8 in the fourth quarter.

Curry was among four Warriors starters who set a postseason high for minutes played Tuesday night. With swingman Andre Iguodala out because of a bruised left leg, Golden State's depth was severely tested.

"I felt like in the fourth quarter we just ran out of gas," Warriors coach Steve Kerr said. "Scored 12 points. Tried to buy a little rest for our guys, but yeah, they just outplayed us in the fourth and they earned it."

According to ESPN Stats & Information tracking, the Warriors pushed the ball up the court via a run out or outlet only three times in the fourth quarter after doing so 22 times in the first three quarters.

Of course, Houston could say the same thing. The Rockets played only seven men Tuesday night, and the seventh man in that rotation, Gerald Green, logged just 12 minutes.

"It's that kind of series," said Tucker, who grabbed a game-high 16 rebounds in a team-high 44 minutes. "I came out for 30 seconds and I went right back in. Coach told me, 'They're going with their guns, so we gotta match guns with guns.'"

Desperation tends to help in finding a finishing kick, and heading into the fourth quarter, Houston was very much in a desperate place. Whatever fatigue the Rockets might've felt had to be conquered.

Toughness. Resiliency. Defensive intensity. Not exactly how the best offensive team in the league thought it'd be winning its most important playoff game in years.

Rockets upend Dubs at home.
A hot start by the Warriors and an explosive third quarter from Steph Curry weren't enough, as the Rockets took a rare win at Oracle Arena.