Ray Rice: It was 'one-time incident' 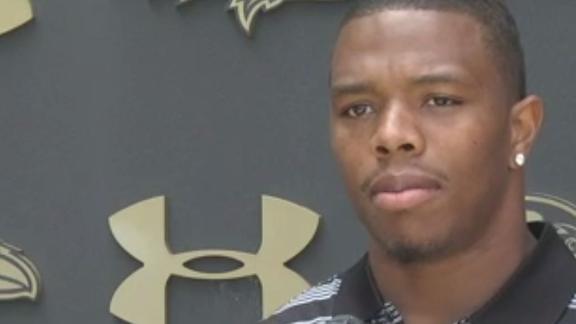 OWINGS MILLS, Md. -- Baltimore Ravens running back Ray Rice apologized to his wife and all women affected by domestic violence on Thursday, when he took questions for the first time since his alleged altercation with his then-fiancee in February.

While Rice declined twice to give details about what happened in the Atlantic City, New Jersey, elevator, he said it was a "one-time incident" and expressed his intentions to become an "ambassador" against domestic violence.

"I made the biggest mistake of my life," Rice said.

"My actions that night were totally inexcusable," he said. "That night I replay over and over in my head. That's not me. My actions were inexcusable. That's something I have to live with the rest of my life. The pain I'm talking about living with is waking up every day, and my daughter is 2 years old now, and I have a little girl, who's very smart, very intelligent, and one day she's going to know the power of Google, and me having to explain that to her, what happened that night."

Rice's wife, Janay, stood in a balcony overlooking the press conference but Rice never looked up at her. He stressed that his wife did "no wrong" and referred to her as "an angel."

Unlike Rice's news conference in May, Rice made a point to apologize to his wife directly.

"There are many nights that me and my wife sleep together and we still have to deal with this," Rice said. "And her pain is my pain, my pain is her pain, the one thing I wanted to do today is you know apologize to my wife, who I've known since high school. I've known her since a kid. I met her in high school and she's the same girl now, great mother, and she's a great wife, and she supports me throughout.

There were about 30 teammates who huddled around reporters to listen to Rice's news conference, including wide receivers Steve Smith and Jacoby Jones, tight end Dennis Pitta, running back Bernard Pierce and kicker Justin Tucker.

In taking questions from reporters for the first time since that incident in February, Rice faced 15 cameras and a media gathering that was three rows deep on either side of him.

Rice allegedly struck Palmer unconscious on Feb. 15 while in a casino elevator in Atlantic City. Video surfaced online showing Rice dragging an apparently unconscious Palmer out of the elevator. The couple has since married.

He pleaded not guilty to a third-degree charge of aggravated assault and avoided trial by being accepted into a pretrial intervention program in May.

"I own my actions," he said. "I just don't want to keep reliving the incident. It doesn't bring any good to me. I'm just trying to move forward from it. I don't condone it. I take full responsibility for my actions. What happened that night is something that I'm going to pay for the rest of my life."

Rice was suspended two games by the NFL last Thursday and fined a total of $529,411.24 -- the combined total of two game checks for this year and one check from last season.

The length of the NFL's punishment came under fire from traditional and social media as being too lenient.

This was different from his press conference in May, when he made some poor word choices (saying "failure is not getting knocked down") and nervously fumbled through his notes on his cell phone.

Rice: My Actions Were Totally Inexcusable
Ravens RB Ray Rice addresses the media for the first time since the announcement of his two-game suspension for allegedly assaulting his then-fiance.

Reaction To Ray Rice's Apology
Jane McManus weighs in on RB Ray Rice's apology to his wife for the alleged domestic incident involving her.