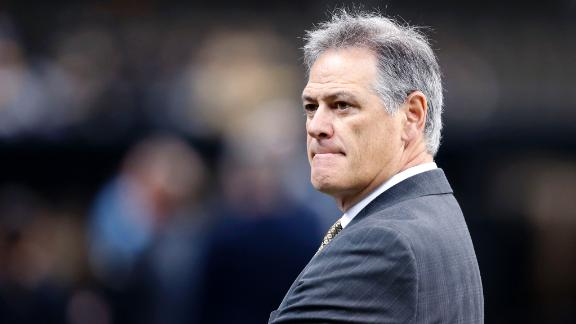 The news was reported earlier Wednesday by The Times-Picayune, which cited a source as saying there will be other unspecified changes to the defensive coaching staff and personnel.

Ryan's status was in limbo for more than a week after Saints coach Sean Payton promised to make significant changes involving "every element of the program" following a disappointing 7-9 season.

But Ryan has been the biggest looming question mark after the Saints ranked 31st in the NFL in yards allowed -- and worse in other metrics.

Ultimately, the Saints decided to keep the faith in Ryan, who had tremendous success in his first year in New Orleans in 2013, when the Saints ranked fourth in yards allowed.

Ryan himself said recently that he never had a season this bad in 10 previous years as a defensive coordinator with the Oakland Raiders, Cleveland Browns, Dallas Cowboys and Saints -- even though he had never been part of a team with a winning record until he joined New Orleans in 2013.

"If I'm back, I'm gonna start [the improvement] with me," Ryan said when he last spoke with the media two weeks ago. "Whatever I can do better, whatever we can do better ... if I have that opportunity."

Ryan said the one positive in 2014 was the way players responded to the tough times and got "tighter" as the year continued.

The Saints struggled in every level of their defense in 2014, finishing in the bottom five in the NFL in total yards, rushing yards, takeaways, third-down conversions and red zone percentage. They were by far the most inefficient defense in the NFL, according to a formula used by ESPN Stats & Information.

It hurt when the Saints lost marquee free-agent safety Jairus Byrd to a season-ending knee injury in Week 5. But the defense was struggling mightily even before that -- Byrd included -- with a combination of missed tackles, blown coverage assignments and failure to generate a consistent pass rush.

In retrospect, Ryan joined several players in admitting that the young defense got too caught up in the preseason hype surrounding the unit.

"Obviously we drank the Kool-Aid a little bit too much, I think. And if they don't think so, I think that's wrong. I think that's an honest opinion," Ryan said. "I think we forgot how we had success [last year]. You know, the 'Nola' defense, where nobody likes our ass. That's how we played better, when our backs were against the wall, when we had a lot to prove."

Ryan, however, never lost the passionate support and "buy-in" from his players, who widely praised him all season, saying they felt like they were letting him down and pushing for him to stay.

"Man, I love him as a coach," safety Kenny Vaccaro said after the Saints' season finale. "I almost want to tear up just even talking about him."

Payton strongly supported Ryan, as well, in the wake of reports that there was a rift between the two and that Ryan likely would be fired after the season.

Payton downplayed the moments where he was spotted chewing Ryan out on the sideline, pointing out that he does that with everyone on game days. And Payton praised Ryan's passion and work ethic, offering the ultimate compliment that Ryan could have worked for Payton's mentor Bill Parcells.