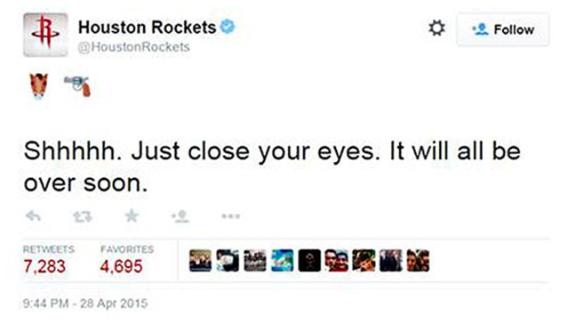 HOUSTON -- The Rockets apologized Tuesday night to theDallas Mavericksfor an in-game tweet posted to their team account that used emoji imagery of a pistol next to a horse and text suggesting the Mavs succumb to an inevitable end.

Houston eliminated Dallas in five games of their Western Conference playoff series with a 103-94 victory.

The Rockets apologized with another tweet and deleted the 10:44 p.m. ET posting that started the three-post thread, which was over and done in 33 minutes.

The postgame interaction on the floor was cordial, with players from both teams exchanging pleasantries and hugs.

McHale, a close friend of Carlisle from their playing days with the Boston Celtics, praised the Mavericks' players, even calling Dirk Nowitzki a champion.

Houston advanced out of the first round for just the second time since 1997.

"It feels good," James Harden said. "Obviously, this isn't it for us. We have bigger goals. It was a great series for our guys, and I'm looking forward to the next one."

Starting small forward Chandler Parsons might need microfracture surgery. Point guard Rajon Rondo was scratched for the series with a questionable back injury after playing two games, and he now enters free agency.

"We've got to get healthy," Carlisle said. "Playing the series without Parsons is a big factor. He's one of our top players, and then the other things that happened during the series.

"Look, injuries are a part of it, and Houston has got a couple of guys down, too. Health is a big part of it. We have a lot of free agents. We've got as many as 11, depending on the opt-ins and opt-outs, and so there will be a lot of activity this summer."