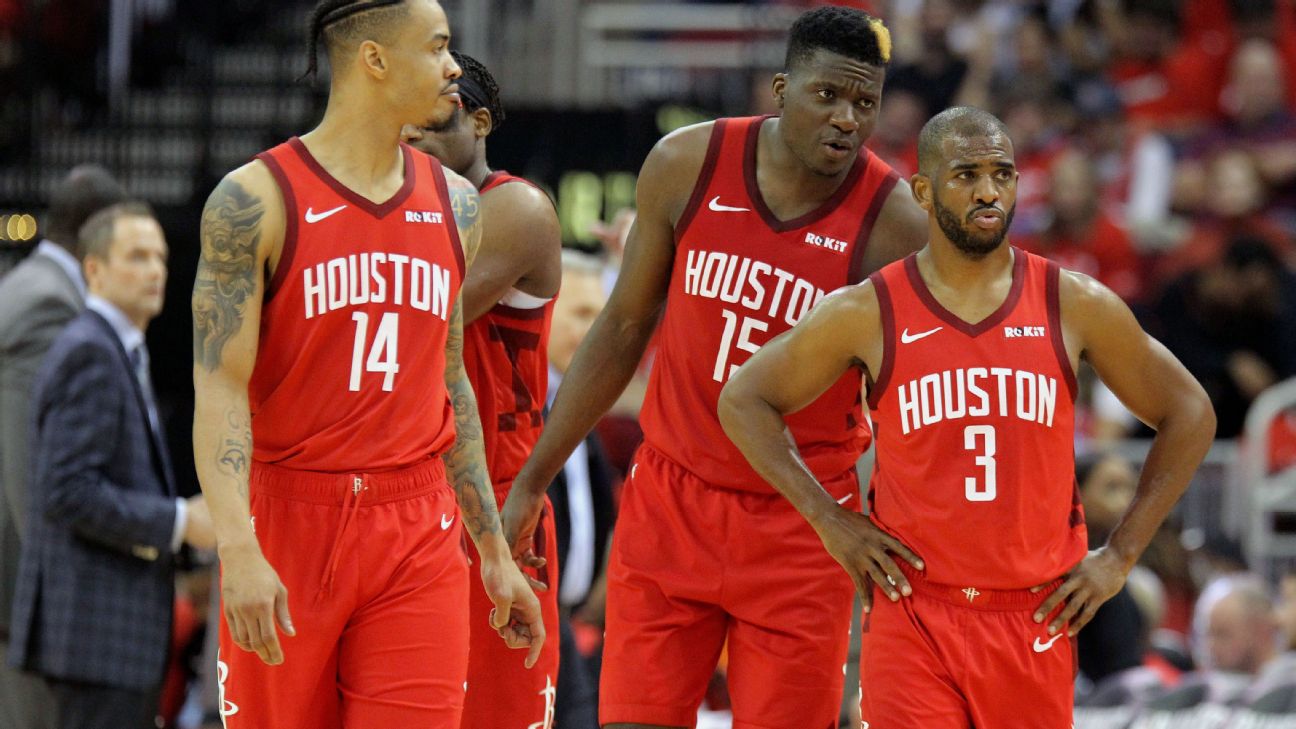 HOUSTON -- The faces of the Rockets franchise preferred to wait until the Golden State Warriors punched their ticket out of the first round to discuss the looming rematch with the dynasty that eliminated Houston last season.

James Harden declined to answer a question about the Warriors in the wake of the Rockets' grinding out a 100-93 win in Game 5 on Wednesday to eliminate the Utah Jazz, saying he would wait and see what happened in Golden State's series with the LA Clippers.

That wasChris Paul's plan, too, until Clint Capela blurted out the truth.

"That's what I want," said Capela, the rising star center who created headlines last season by declaring to ESPN that he believed the Rockets were better than the Warriors when they executed well. "I want to face them."

The Clippers prevented the Warriors from granting Capela's wish -- at least for now -- as LA extended the series with a 129-121 road win over Golden State in Game 5 on Wednesday.

Paul, who was seated next to Capela after Harden conducted a solo news conference, responded with a sigh. Paul, the savvy veteran point guard, instantly knew that Capela's confident comment would go viral.

"Look at you," Paul said, glancing at a reporter. "You can't wait to tweet that."

But Capela, who bounced back from an illness-influenced poor performance in Houston's Game 4 loss with 16 points, 10 rebounds and 3 blocks in the close-out victory, kept going. He saw no reason to hide the fact that the Rockets have been hoping to get another crack at the Warriors since they were eliminated by Golden State in Game 7 of last spring's Western Conference finals.

That point was conceded by Paul, who missed the last two games of last season's West finals due to a hamstring strain, an injury many in the Rockets organization are convinced cost them an NBA championship.

"Yep, make sure y'all put that, too," Paul said, meaning the full context of Capela's desire to see the Warriors in the second round.

"CC said it best. Real talk. In order to get to where you're trying to get to, you've got to go through them. They're the reigning champs, been running the West for, like, five years straight now."

The Rockets, known primarily for their historically elite offense led by Harden, earned their way to the second round in gritty fashion against the defensively dominant Jazz.

After opening the series with a pair of home routs, the Rockets sputtered offensively in the final few games, in which Harden averaged 26.0 points (more than 10 fewer than his league-leading average) on 32.3 percent shooting. But the Rockets played stingy defense throughout the series, holding the Jazz to fewer than 100 points three times in the series, though some poor shooting by Utah helped.

It was fitting that a couple of defensive stops were the key plays in the Rockets' Game 5 win. With Houston up one and 54.8 seconds remaining, Eric Gordon stole the ball from Donovan Mitchell, the Jazz star whom Gordon smothered all series, especially during Mitchell's 12-point, 4-of-22 shooting, 5-turnover outing Monday. After PJ Tucker sank a pair of free throws, Harden swiped the ball out ofRudy Gobert's hand as the Jazz big man went up for a dunk, essentially ending Utah's season.

"We didn't make as [many] shots as we wanted to offensively, but these last few games, we hung our hat on defense," said Harden, who finished Game 5 with 26 points on 10-of-26 shooting despite a 1-of-11 start and contributed 3 steals and 4 blocks. "That's what's going to get us to our goal. Shotmaking is extra. It's a bonus. If we're guarding like we're guarding and knocking down our shots, it's going to be real tough."

Of course, it has been tough to beat the Warriors in the playoffs for the past five seasons, in which their only series loss has come in the 2016 NBA Finals. It's a challenge the Rockets will readily embrace.

It doesn't bother Houston that a date with the Warriors would come a series before last season, the result of the Rockets' dropping to the Western Conference's fourth seed on the final day of the regular season after spending months digging out of the hole they created with an 11-14 start. The sooner the better, some Rockets figure.

"I don't mind playing them this early," Gordon said. "Everybody's going to be fresh. I'm glad nobody's injured. We're going to have everybody ready, so I'm glad where we are right now."

Rockets coach Mike D'Antoni tried to delay the discussion about a rematch with the Warriors, saying it was premature. However, he couldn't resist weighing in just a little bit. 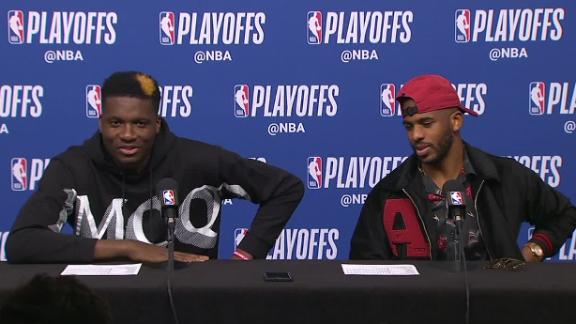