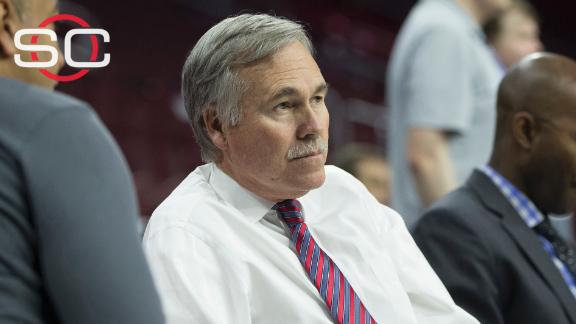 HOUSTON -- The Rockets are finalizing a deal to make Mike D'Antoni their next head coach, according to multiple sources.

The offensive-minded D'Antoni has been a head coach with the Denver Nuggets, Phoenix Suns, New York Knicks and the Los Angeles Lakers. He is currently an assistant coach with the Philadelphia 76ers.

Sources say the Rockets are working on a three-year contract with D'Antoni, with a team option for the fourth year. He would replace Kevin McHale, who was fired 11 games into this season. J.B. Bickerstaff replaced him on an interim basis.

D'Antoni, 65, is known for an up-tempo offense that uses a dynamic point guard, made famous with his "7 Seconds or Less" method in Phoenix. Defense, however, isn't his strength.

Houston interviewed 12 candidates for the position, including Bickerstaff, who pulled out of the running early in the process.

San Antonio Spurs assistant coach James Borrego interviewed for the second time Wednesday. There was a thought that Borrego might be a dark horse candidate, along with D'Antoni and Charlotte Hornets assistant coach Stephen Silas.

D'Antoni interviewed twice with the Rockets, including a face-to-face meeting with team owner Leslie Alexander in Florida. During the process, D'Antoni and Silas emerged as the favorites for the job last weekend, but team sources said more interviews were forthcoming.