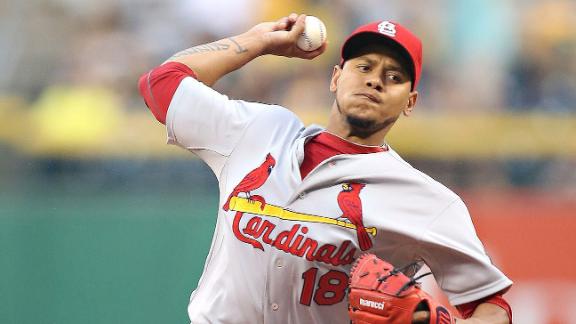 Martinez surged ahead of Reds pitcher Johnny Cueto in voting that ended Friday afternoon to become the sixth Cardinals player to make the NL roster for Tuesday's Midsummer Classic in Cincinnati.

A first-time All-Star, Martinez might've gotten a voting boost from his outing Thursday night, pitching 7 scoreless innings against the NL Central-rivalPirates. The 23-year-old Martinez is 10-3 with 2.52 ERA this season.

"When I saw names like Cueto and Kershaw and Tulowitzki, I really didn't feel like I had a very good chance to win," Martinez said ahead of the Cardinals' game at Pittsburgh. "That's why I'm so thankful to all the fans and all their help."

Moustakas, 26, becomes the seventh Royals player set to participate in the All-Star Game. Also a first time All-Star, Moustakas was hitting .301 with seven homers and 31 RBI for the AL Central leaders.

"The best fans in baseball. They proved that in the voting and again with the second voting. They've been with me the whole way," Moustakas said in Kansas City. "It's an exciting time to be a Royal."

Moustakas had been away from the team for the previous four games to be with his ailing mother, missing out on much of the campaigning for the final spot.

"When I'm hanging out with my mom, all that other stuff doesn't really matter," he said. "I get to hang out with her, talk to her and see how she's doing. It really puts everything else in perspective."

Dozier was grateful for all the support from the Twins and their fans. Minnesota parked a bulldozer outside Target Field and the second baseman got support from fellow athletes such as Brett Favre, theWild's Zach Parise and Ryan Carter and the Vikings' Chad Greenway.

"I wouldn't say it's disappointing," Dozier said before hitting a walk-off three-run homer in an improbable 8-6 win over the Tigers in Minneapolis. "It's kind of crazy in the fact of how that's the voting process, but we had a lot of fun with it."

Asked if he was disappointed not to be selected for his fifth straight All-Star Game, Kershaw, the reigning NL Cy Young Award winner and MVP, said, "A little bit, for sure. You want to go to the All-Star Game, so there's a little bit there, but it feels nice to see fans vote for me and even cooler to see my teammates campaign for me."

Kershaw could still wind up in Cincinnati if another pitcher pulls out because of injury or a Sunday start that would remove that pitcher from consideration to be used on the game.

ESPNLosAngeles.com's Mark Saxon and The Associated Press contributed to this report.