Ruling on Green-LeBron incident could come Sunday, per sources 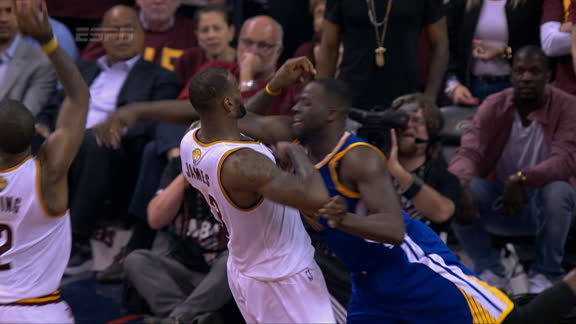 CLEVELAND -- An incident involvingDraymond Green and LeBron Jameslate in Friday night's Game 4 of the NBA Finals is under league review, and there is growing concern among theGolden State Warriorsthat Green could be suspended for Monday night's Game 5, sources told The Undefeated's Marc J. Spears.

Interviews for those involved took place Saturday night, and a decision could come Sunday, sources say.

The Warriors lead the best-of-seven series 3-1.

The play in question this time came with less than three minutes left in Golden State's108-97, Game 4 victory over the Cleveland CavalierswhenGreen and James got tangled. James stepped over Green after the Warriors forward fell to the court, and Green swung his arm and appeared to make contact with James' groin area. James immediately turned around, and the two players went chest-to-chest as play continued.

Moments later, they got involved chasing a rebound, and each was called for a foul. They then had to be separated.

James seemed more upset with Green's words than his actions.

"I don't know what should happen. It's not my call. That's the league office. They'll take a look at it," James said. "We all saw it in the locker room.

"You know, like I said, as a competitor, I love going against Draymond, and I'm all about going out there and leaving it out on the floor. But when it gets a little bit more than what it should be, that's what caused me to have words with him."

In his playoff diary for The Undefeated, Green said of the incident: "[James] stepped over me and I felt like that was disrespectful. I don't disrespect you on the court. Don't disrespect me. There's no love lost. It is what it is. It's a battle out there. I'm going to battle with whoever it is.

"We had our words. I said what I had to say and he said what he had to say. Move on. I'm not going to sit there and argue with him. I know what position I'm in, in terms of double techs and stuff. Just move on from it."

Green and James have a business relationship through the social media platform Uninterrupted, which James owns.

"We got tangled up. It is what it is," Green said in an interview with ESPN Radio. "I've got mad respect for LeBron and what he's done. He's a competitor; I'm a competitor. It's Game 4 of the Finals. I don't think anyone expects anything less. And if they do, they're expecting the wrong thing."

James was angered by what Green said to him during the incident. Green declined to comment on what he said, saying he would not repeat it. A source told ESPN's Dave McMenamin that Green upset James by calling him a "b----."

"Draymond just said something that I don't agree with. I'm all cool with the competition. I'm all fine with that, but some of the words that came out of his mouth were a little bit overboard," James said. "Being a guy with pride, a guy with three kids and a family, things of that nature, some things just go overboard, and that's where he took it, and that was it."

Davis doesn't see any cause for Draymond to be suspended
Antonio Davis explains why he does not believe Warriors forward Draymond Green's actions towards Cavaliers forward LeBron James during Game 4 of the NBA Finals should warrant a suspension.

LeBron: Draymond went overboard
LeBron James tells reporters he thought Draymond Green was out of line during their altercation in Game 4 of the NBA Finals.

Things get chippy between LeBron and Draymond
LeBron James and Draymond Green get tangled up late in the fourth quarter of Game 4 of the NBA Finals, leading to pushing and shoving and a lot of chatter.