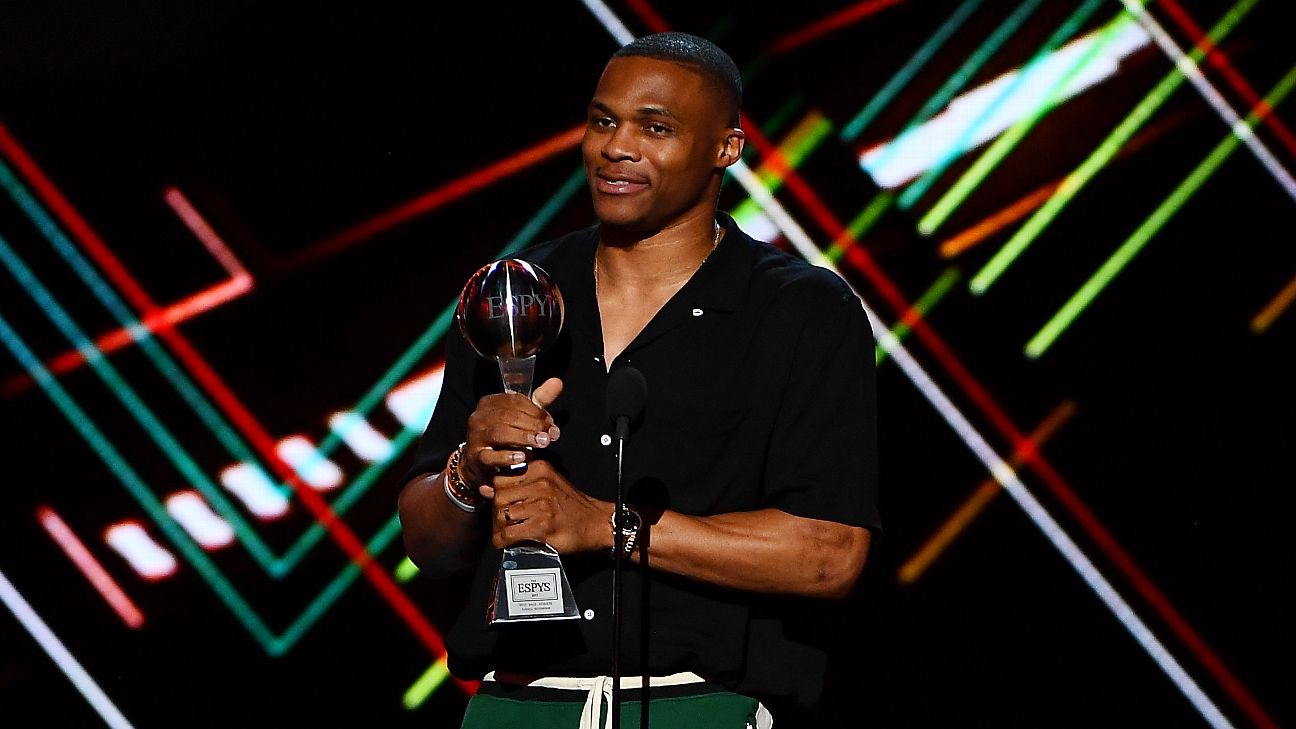 From the jokes by host Peyton Manning to the stories of inspiration by sports fans such as Jarrius Robertson, there were plenty of smiles -- and even some tears -- at the 25th ESPYS on Wednesday night in Los Angeles.

Many of the world's best athletes packed into the Microsoft Theater for the annual awards show, and by night's end, some familiar names took center stage.

One of them wasOklahoma City Thunder starRussell Westbrook, who was named best male athlete, adding to the NBA MVP trophy he won in New York a few weeks ago.

Westbrook, who averaged a triple-double and broke Oscar Robertson's record for most triple-doubles in a season with 42, captivated the sports world with his ferocious season in the wake of Kevin Durant's departure from the Thunder.

Durant captured his first NBA title and Finals MVP trophy last season, and his dominant run through the Finals earned him the 2017 ESPY for best championship performance.

Durant led the Golden State Warriors to a title by averaging 35.2 points, 8.2 rebounds and 5.4 assists with a .556 field goal percentage in the team's five-game victory over the Cleveland Cavaliers. He capped the series with 39 points, six rebounds and five assists in Golden State's title-clinching 129-120 win in Game 5.

Durant joined the Warriors in one of the most debated moves in recent NBA history, signing as a free agent last summer after spending nine seasons with the Oklahoma City Thunder, who held a 3-1 series lead over the Warriors in the 2016 Western Conference finals before eventually losing.

Manning took a light-hearted jab at Durant's move during his opening monologue, mentioning the gold-medal-winning U.S. women's gymnastics team and joking, "Our gymnastics team was so dominant that Kevin Durant told me that he wants to play for them next year."

Durant sat stone-faced as Manning continued, "And I gotta tell you, I don't think you'd start for that team, Kevin."

Durant's dominance in the Finals also helped his Warriors win the ESPY for best team.

"Right now we look like the most perfectly constructed 3-on-3 team," Curry said jokingly. "But we have 12 other guys who obviously helped us achieve this award.

"It was an unbelievable year. A lot of noise and hype around us in the beginning of the season, but we tried to keep our head down and focus on the process, and nine months later, we got another 'ship."

Golden State's Game 5 victory in the Finals completed a 16-1 run through the playoffs. The team's only postseason loss came in Game 4 in Cleveland.

The Warriors captured their second title in three seasons.

The Cubs'thrilling seven-game World Series victory over the Cleveland Indians, which ended a 108-year title drought, took the ESPY for best moment.

"This was truly the best moment of all time -- ever," Offerman deadpanned.

"108 years of waiting is hardly a moment," Murray said before naming a long list of former Cubs players from throughout the title drought.

The Cubs' Game 7 victory came with plenty of drama, including an extra-inning rain delay and a dramatic eighth inning in which the Indians tied the score after trailing 6-3.

Manager Joe Maddon's team halted the longest stretch without a title in baseball while also becoming the first club to overcome a 3-1 Series deficit.

American gymnast Simone Biles' record-tying four gold medals at the Rio Olympics propelled her to stardom and earned her the ESPY for best female athlete.

"Ever since Rio it has been an amazing year," Biles said, "and the best part of all has been meeting all the young people who look up to all the athletes in this room."

Biles won gold in the individual all-around, vault and floor exercise as well as a team gold to go with a bronze medal on the balance beam in Rio.

She is one of only four women, and the first American, to win four golds in a single Olympics. She was also the first women's gymnast to carry the flag for the United States at the closing ceremony.

"I've got to thank my teammates," Prescott said after receiving the award. "All those great vets that allowed me to come in as a rookie and just take over the team and propelled me to do so."

Thrust into the starter's role after Tony Romo was injured in the preseason, Prescott was an immediate hit in his first NFL season, earning a Pro Bowl selection in addition to winning top rookie honors.

He wasthe Cowboys' first offensive rookie of the year since Hall of Fame running back Emmitt Smith.

The New England Patriots' historic comeback against the Atlanta Falcons in Super Bowl LI was awarded the ESPY for best game.

The Patriots trailed by 25 points in the third quarter before rallying to win 34-28 in overtime to complete the greatest comeback in Super Bowl history. No team had ever made up more than a 10-point deficit to win a Super Bowl.

Tom Brady led the Patriots on five straight scoring drives as the team scored 31 straight points. It was the first overtime in the Super Bowl's 51-year history.

Patriots wide receiver Julian Edelmanused the moment to crack a joke at Manning's expense. After remarking that Manning was "killing it" on his host duties, Edelman quipped, "We are indoors, though" -- a reference to Manning's cold-weather struggles during his playing days.

Jarrius Robertson, the charismatic 15-year-old whose battle with a rare liver disease inspired fans and athletes alike, was the winner of the Jimmy V Perseverance Award.

Robertson was given the award for the strength and courage he displayed while battling biliary atresia, a disease that affects the bile ducts, beginning at infancy.

"I have been doing things that I never thought I could do before," Robertson said.

A loyal fan of the LSU Tigers and New Orleans Saints, Robertson thanked the NFL team for "giving me a platform for doing what I do best -- being myself."

Earlier Wednesday, Saints owner Tom Benson and his wife, Gayle, said they donated $25,000 to help with Robertson's medical costs. That amount will be matched by NFL commissioner Roger Goodell.

Scully, who retired last year after a 67-year run in the Dodgers' booth, was presented the award by actor and L.A. native Bryan Cranston, who flew from New York to introduce Scully.

"I don't have a relative in the world that would do that for me," Scully joked.

Scully was the voice of the Dodgers from 1958 to 2016, the longest run by any sportscaster with a single club.

Eunice Kennedy Shriver died in 2009. Obama called her "a remarkable woman, a woman who believed that everyone has something to contribute and everyone deserves a chance."

Timothy Shriver chairs the Special Olympics, which his mother founded in the late 1960s to help empower people with intellectual disabilities.

The courage award is given annually to someone who embodies the spirit of its namesake, tennis legend and longtime human rights campaigner Arthur Ashe. 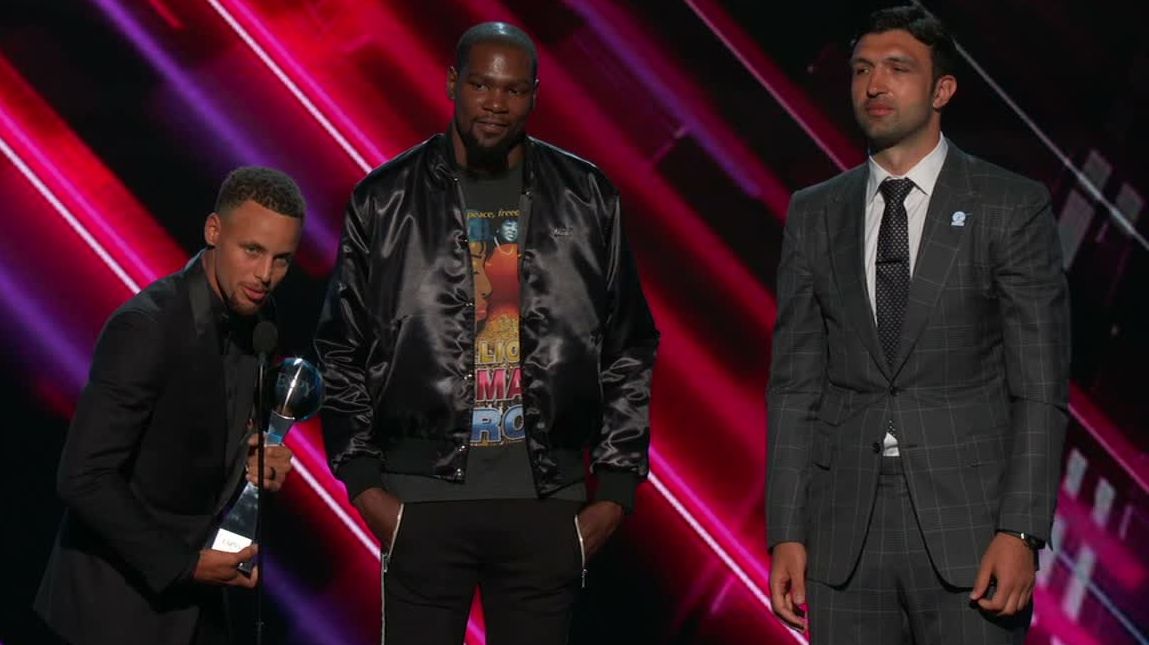 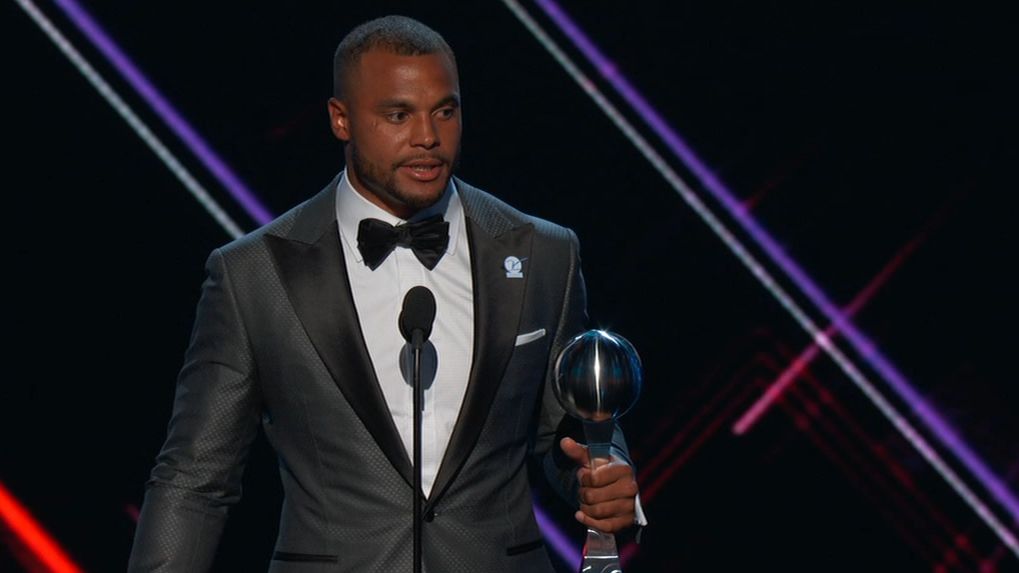